The end of a wonderful era.

785 games and 307 goals later, Totti is no longer a Roma player as the ultimate one club man parted ways with his boyhood club after almost 25 years of service. 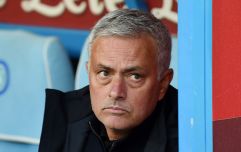 END_OF_DOCUMENT_TOKEN_TO_BE_REPLACED

Sunday saw Totti start on the bench as Luciano Spalleti named his final XI of the season but the afternoon was never going to finish without Roma's favourite son taking to the pitch.

Before the hour mark, with the game finely poised at 1-1, Totti arrived and injected some matchless experience before inspiring Roma to a 3-2 victory, guaranteeing I Giallorossi a second-placed finish in Serie A and direct qualification for the Champions League group stage.

Totti may not have found the net on his swansong but he gave his adoring fans inside the Stadio Olimpico something to shout about with a glorious touch using his back.

Francesco Totti has better control with his back than most people do with their feet pic.twitter.com/9kWDubR8YH 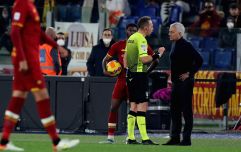 END_OF_DOCUMENT_TOKEN_TO_BE_REPLACED

Of course he did!

And while that trick got the supporters laughing and cheering, there wasn't a dry eye in the house after the final whistle blew as an emotional farewell ceremony got underway.

Even the photographers in attendance wanted to get a picture with 40-year-old, who was brought to tears by the occasion. END_OF_DOCUMENT_TOKEN_TO_BE_REPLACED

Totti thanked the fans, who thanked him right back for all the memories he's provided since making his Roma debut on 28 March 1993.

The Italian legend has never stopped contributing to the side and, even at 40, he found himself surprising supporters with his stunning ability to control a football.

Omg that back pass/touch by Totti was god like

Totti passing a dropping ball with his back. I'm crying.

Totti back pass there 👌 #literally

Totti just settled the ball with the back of his neck. Unreal.