Did you really expect him not to?

Snoop Dogg is known predominately for two things: rapping and weed - so it's little surprise that just before he took to the stage for the Super Bowl halftime show this weekend, he smoked a joint.

Performing alongside other gods of rap like Eminem, Dr Dre and Kendrick Lamar, Snoop sparked a joint before grabbing a mic - as viral footage has shown.

Warming up before going on stage for the Halftime Show. pic.twitter.com/dKs6AAzjK8

The footage, which appears to have been taken from security monitors, was posted by US sports pundit Rafa El Alcalde. 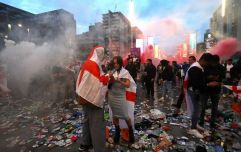 END_OF_DOCUMENT_TOKEN_TO_BE_REPLACED

Fans of the 50-year-old musician have reacted online, with one writing: "Snoop has a free pass to smoke weed anywhere in the world. Literally anywhere."

Another said: "Snoop is unbeatable lol," while another added: "That man was buzzing in his performance."

Dr Dre and Snoop opened the show with "The Next Episode" before paying tribute to their fallen friend Tupac Shakur with "California Love."

50 cent also made a surprise appearance, where he performed "In Da Club" before Mary J. Blige ripped into "Family Affair". Lamar then took to the stage, the same artist that Kanye West recently dubbed a "top tier" lyricist.

Eminem's rendition of "Lose Yourself" was incredible, more so after he defiantly took the knee.

While it was initially reported that the NFL forbid the rapper from taking the knee, reporter Mike Freeman said he had been told NFL bosses made no such request to Eminem.

He wrote: "The part of the show were Eminem kneeled? Report stated it was against the wishes of the NFL. However, NFL spokesman Brian McCarhy told me that report is false.

"The NFL watched every rehearsal this week and that element was included. Just passing along."

He also told FOX News: "We watched all elements of the show during multiple rehearsals this week and were aware that Eminem was going to do that."

popular
Moment Jake Paul ends up in dramatic fight with YouTuber in club
Landlord faces £40k fine after tenant puts swimming pool on roof of flats
Bulgarian mystic who correctly predicted Princess Diana’s death and 9/11 sees 2022 prophecy come true
Man United have 'decided to sell' promising midfielder James Garner
Graeme Souness 'doesn't regret a word' of 'man's game' comments that sparked sexism row
Graeme Souness under fire for calling football a ‘man’s game' while sat with Karen Carney
Incredible case of the only known individual whose parents were two different species
You may also like
Entertainment
Ezra Miller accused of leading a cult, wearing body armour and carrying a gun everywhere he goes
Life
Follically challenged, rejoice - scientists have discovered a potential cure for baldness
News
Woman nearly dies after picking up $1 note from the pavement
News
Woman 'cut off lover's head and penis after killing him during sex while high on meth'
Entertainment
Machine Gun Kelly details how he put a shotgun in his mouth while Megan Fox was away filming
Next Page