"There’s a greed & hypocrisy across football embodied by people like Gary."

Simon Jordan has launched a scathing attack on pundit Gary Neville, saying that he "embodies" the greed and hypocrisy in football.

END_OF_DOCUMENT_TOKEN_TO_BE_REPLACED

Speaking on talkSPORT, the former Crystal Palace owner was addressing Neville's comments in the aftermath of Manchester United fans breaking into Old Trafford on Sunday in protest against the Glazer family who own the club. The fans' actions caused United's game with rivals Liverpool to be postponed.

Neville has been extremely vocal in his criticism of the Glazer family ever since their involvement in the Super League fiasco in April. But Jordan, who has never been one to shy away from giving an opinion, sounds like he's had enough of hearing from Gary.

On his radio show he said: "I don't care what people like Gary Neville come out with, calling on a lynch mob and start to talk about the fact that this is an entitlement for fans to do. 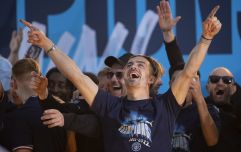 END_OF_DOCUMENT_TOKEN_TO_BE_REPLACED

Jordan goes on to criticise United fans, labelling their criticism of the Glazers as hypocritical.

Jordan then went on to criticise Gary Neville's ownership of Salford, saying that "he [Neville] got a billionaire owner [Peter Lim] in there that's funding Salford, that to my mind are losing money left, right and centre and probably breach financial fair play."

The businessman said that the debates and issues around football club ownership are "being utilised by Gary to advance a soapbox wrapped in hypocrisy."

😡 “It’s being utilised by Gary to advance a soapbox wrapped in hypocrisy.”

😤 “There’s a greed & hypocrisy across football embodied by people like Gary.”@SJOpinion10 says Gary Neville should not be seen as the voice of the fans. pic.twitter.com/rKkMXRmQ6w