Ex-Nantes footballer Shiva N'Zigou has reportedly made a series of exceptional claims at a "Christian confession ceremony", including that his mother was sacrificed by his father. 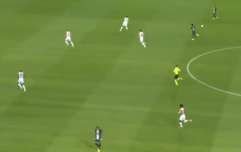 END_OF_DOCUMENT_TOKEN_TO_BE_REPLACED

N'Zigou also admitted that he is five years older than he claimed throughout his career, which would now make him 39 rather than 34.

The most spectacular claim of all however is that his mother was sacrificed by his father. While GFFN report that it was to keep money made from his son's contract to himself, it has also been claimed that the "spiritual sacrifice" was to further N'Zigou's career while at Nantes.

N'Zigou, a former Gabonese international who played 24 games for his country, spent four seasons at Nantes during his career, before a move to fellow French side Reims.

He had previously been listed as the youngest player to score in the African Cup of Nations - after a goal for Gabon in a 3-1 loss to South Africa in 2000 - before it was revealed that he lied about his age.

Ex-Nantes & Reims striker Shiva N'Zigou has revealed that he's 5 years older than claimed, 40 not 35. Also that he has slept with his aunt & sister & that his father killed his mother as a "spiritual sacrifice" designed to keep all money made from his son's contracts to himself.

popular
Multiple fatalities after planes collide mid-air over airport
Incredible case of the only known individual whose parents were two different species
Andrew Tate banned from Instagram and Facebook
Footage emerges of Andrew Tate getting knocked out during kickboxing bout
The JOE Friday Pub Quiz: Week 308
Court hears cringeworthy poems Ryan Giggs wrote to his ex
Rishi Sunak names his usual Maccies order - but it was withdrawn more than 2 years ago
You may also like
News
Suspected flasher shot dead by naked pensioner for masturbating at a nudist beach
News
French woman fumes at McDonald's over their response to her finding a lizard in her burger
Politics
British government could have fixed Dover port problems in 2020 - but they opted not to
Weather
Jeremy Clarkson slammed for ‘exceptionally stupid’ and 'insensitive' tweet about heatwave
Sport
Italy captain somehow escapes red card for savage tackle on France star
Next Page