We may not have heard the last of this.

Granit Xhaka and Xherdan Shaqiri could face punishment over their goal celebrations in Switzerland's 2-1 victory over Serbia. 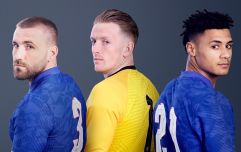 Why England players have no names on shirts against Switzerland

END_OF_DOCUMENT_TOKEN_TO_BE_REPLACED

Xhaka and Shaqiri both made an Albanian nationalist Black Eagle symbol after scoring as the Swiss came back from a goal down to win their Group E clash on Friday evening.

The Swiss duo are both of Kosovar-Albanian heritage and the celebrations were perceived in some quarters as being provocative considering the backdrop of tension between ethnic Albanians and nationalist Serbs.

Shaqiri was born in Kosovo and had the country's flag stitched onto the heel of one of his boots, with the Swiss flag on the other.

Xhaka's father was imprisoned in the former Yugoslavia for campaigning for Kosovan independence. The Arsenal midfielder's older brother, Taulant, represents Albania at international level having played for Switzerland's youth teams. 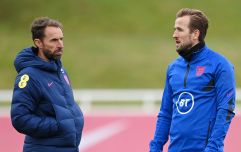 END_OF_DOCUMENT_TOKEN_TO_BE_REPLACED

Kosovo declared independence from Serbia in 2008 but Serbia still does not recognise Kosovo's independence. The relationship between the two nations remains tense, with Xhaka and Shaqiri among the Swiss players being whistled by Serbia-supporting Russians in Kaliningrad on Friday.

#SRBSUI Shaqiri nets an excellent #SUI winner and the 🇦🇱 eagles come out in the direction of the #SRB fans who have been booing him all game.

Shades of the flag/drone incident of 2014 when Serbia faced Albania in a Euro qualifier.

The Football Association are thought to be contemplating writing to FIFA to formally complain about the pair's 'political celebrations.' 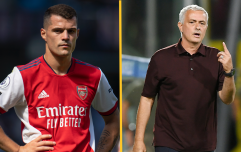 END_OF_DOCUMENT_TOKEN_TO_BE_REPLACED

FIFA can sanction the two players if their celebrations are deemed to have provoked the general public. If found guilty, Xhaka and Shaqiri face being banned for two games.

Shaqiri brushed off suggestions of political connotations with his celebration, saying it was instead the product of pure emotion.

“It was a fantastic goal," the Stoke City winger said."An important goal for my team and I am very proud I was able to score it for them. I can’t discuss the gesture I’m afraid. We are footballers, not politicians… Emotions sometimes take over footballers and there was a lot of emotion out there.”

Xhaka also said his celebration was an emotional one and not political: “Frankly, my opponents did not interest me at all. It was for my people, who always supported me. For those who did not neglect me, in my homeland, where my parents’ roots are. These were purely emotions.”

popular
Runner finishes last in 400m race as penis keeps falling out of shorts
Teacher's sex abuse sentence delayed after she gives birth
Inbetweeners star Joe Thomas has been in a relationship with his co-star for over 10 years
Massive piece of Elon Musk's spacecraft lands on farmer's property and could make him very rich
Woman almost died during sex when orgasm popped aorta
Tourists left 'squealing' as thousands of venomous crabs invade UK beach
Andrew Tate claims to be world's first ever trillionaire
You may also like
News
Petition to deport Putin's 'lover' out of Switzerland is heating up after 63,000 signatures
News
Vladimir Putin hiding lover Alina Kabaeva and their kids in Switzerland
News
Prince Andrew 'to sell £17m Swiss chalet to cover cost of sex abuse case'
Life
First country in Europe legalises marijuana for personal use
Health
End of life 'suicide capsule' machine gets approval in Switzerland
Next Page