As Sam Allardyce gets his England tenure underway against Slovakia, his predecessor's first game in charge feels like a distant memory.

Roy Hodgson's first game as England boss might have been just four-and-a-bit years ago, but that 1-0 victory over Norway doesn't seem nearly that recent. 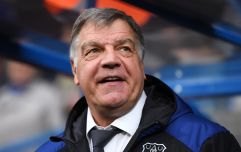 END_OF_DOCUMENT_TOKEN_TO_BE_REPLACED

Part of that can probably be put down to the wholesale changes we've seen throughout Hodgson's tenure alone.

But how well do you remember his first line-up? You've got three minutes to name the starting XI that took to the field in Oslo, and it's tougher than it seems.

popular
British teen says she was raped in Majorca hotel by 'famous actor and musician'
Bette Midler wants the US to ban Viagra because it’s ‘God’s will’ to have a ‘limp d**k’
Amber Heard is now being investigated for perjury
Supermarket cracks down on people breaking off broccoli stems to save money at the till
Radio station plays 'Killing in the Name' non-stop from 6am after multiple staff get fired
A definitive ranking of every swear word from worst to best
Nadine Dorries has done it again, this time mistaking rugby league for rugby union
You may also like
Sport
Sam Allardyce demands break in football calendar to combat Covid-19
Sport
Oumar Niasse issues come and get me plea to Big Sam
Sport
Big Sam says Arsenal are rivals in relegation battle
Sport
Slaven Bilic to be sacked by West Brom with Sam Allardyce favourite to replace him
Entertainment
Putting football managers into The Sims
Next Page