Security guards taking him out but Tiger still roars on

If you went to bed early last night, you missed out on a hell of a lot

Augusta, Georgia is the place to be this weekend with the US Masters finely poised going into moving day. Thursday didn't disappoint, and neither did Friday with Tiger Woods surging up the leaderboard like he would have done this time ten years ago.

Absence makes the heart grow fonder and the crowd were absolutely mad for it. Whatever it is about Tiger, he notches up the excitement levels like nobody else can.

And he was in the thick of it on Friday evening. A late starter, he had some catching up to do on the likes of Francesco Molinari, Jason Day and Brooks Koepka, all of whom finished their second round on -7, but the Tiger was only relishing the challenge.

Beginning his day on -2, the American had a solid front nine, turning on 35 but he exploded into life on the turn. He birdied the notoriously difficult Par 4 11th and that gained shot - from the middle of nowhere really lit the touch paper.

Even the security guards couldn't contain themselves with one of them making a decent attempt of taking out golf's most iconic player from behind.


He was in the zone though, and recovered quickly.

Fair play to Tiger for staying on his feet, great to see, no room for diving in the game #TheMasterspic.twitter.com/JjPZo24Npv

END_OF_DOCUMENT_TOKEN_TO_BE_REPLACED

More birds followed on 14 and 15 with his final birdie of the day showing all the signs of the Tiger of old. The pace judged to perfection up the hill, every single soul at Augusta looking on in awe, the ball dropping and Tiger looking in control and pumped.

He parred them home and goes into Saturday one off the three mentioned above.

There's hardly a roar in sport like it 🐯🐯pic.twitter.com/eig6J5LME5 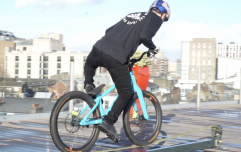 Can you learn BMX stunts from a pro in one afternoon?

END_OF_DOCUMENT_TOKEN_TO_BE_REPLACED

In contrast, it never really sprung to life for Rory McIlroy who signed off on his second round with a frustrating 71. An early bogey on the Par 5 second had him chasing his tail though a quickfire Birdie, Eagle blitz on six and eight looked like it would reignite his tournament.

Rather than taking off though, Rory's challenge faded down the back straight with a couple of sloppy, loose approach shots leaving him in bother. To his credit, he battled hard and did well to gain one shot for his round, but he'll need a huge round on moving day if he's to stay alive.

His waywardness came to a head on 14 when his tee shot landed in the glove box of a caddy car. A free drop and a measured approach helped save a par that would sum up his round.

If you went to bed early last night, it's fair to say you missed quite a bit!

Rory McIlroy ended his round on level par and he'll need a big moving day to get himself back into it...pic.twitter.com/Ez5FNBJtCg

Jon Rahm and former champion Zach Johnson were hitting shots that give the rest of us all hope. Johnson playing the ball on his practice swing and Rahm shanking the living daylights out of an approach shot.

Zach Johnson hits the ball on his practice swing at 13!

Luckily for him, he was able to retake and he went on to make birdie 🦆 pic.twitter.com/xO7wsEiPYM

Even the best are vulnerable to looking like the rest of us sometimes...

That's the madness of the masters. Going into Saturday's round, the bookies have Molinari, Koepka, Woods and Dustin Johnson as the joint favourites.

You may also like
Sport
Rory McIlroy shot shows the crap you have to deal with when you're too good at golf
Uncategorized
If you took a punt on Dustin Johnson to win the Masters, you may need to sit down
Sport
Are Arsenal the new Everton? | Football Trending
Football
Imagining a world without Lionel Messi at Barcelona
Football
Football Manager 2020: Destroying Liverpool
Next Page