"Oh no, what have I done here?" - Sean O'Brien on England star he owed an apology to

Sean O'Brien is never reluctant to hold his hands up if he feels he has done something wrong.

Back at the 2015 World Cup, he recalls giving his Ireland teammates a lecture, in the tunnel, before they went out to face France in a crucial pool game. He recalled:

"I think I was fourth or fifth out - and I said, 'Nothing stupid early on, lads'... and then, 90 seconds later, I'd a fella punched in the stomach, myself!" 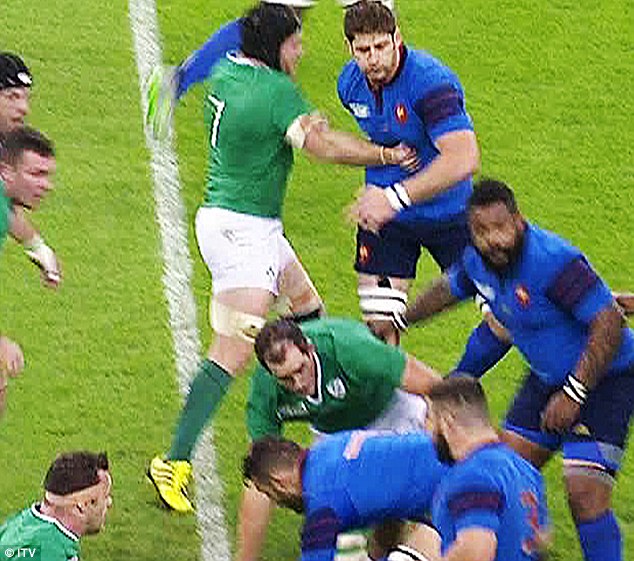 O'Brien received a one-game ban for his early dig on Pascal Papé and described missing out on the World Cup quarter final, which Ireland lost to Argentina, as the biggest regret of his career.

END_OF_DOCUMENT_TOKEN_TO_BE_REPLACED

The London Irish flanker has a reputation of being a fierce competitor but has a decent disciplinary record. It was one of the reasons why he only got a one-game ban for that Papé strike. There was another punch, thrown much earlier in his career, that O'Brien admits he never should have thrown.

On House of Rugby [LISTEN from 17:15 below], the 61-times capped Ireland and Lions star told co-host Alex Goode about a bad lapse while playing for Ireland U21s against England.

"It was with Ireland Under 21s and it was at Sixways stadium. He was on fire that day. He was the up-and-coming England outhalf. I think Johnny Sexton was on the bench that day for us.

"We got man-handled. They were absolutely monstrous, compared to us. I remember even the jerseys we had on... I had something like a three XL and they were dragging below my shorts. It was that kind of era."

"Without even looking at him," Sean O'Brien recalls, "I swung around"

One of the other England U21 forwards, who would go on to win 44 Test caps, was prop David Wilson. O'Brien comments:

"I remember David Wilson all right! He blocked me, actually, I was trying to get through to Toby. They set up a ruck and were hitting him on to kick it long.

"I was trying to get through, and David kind of clothes-lined me. And without even looking at him, I swung around and connected with him, in the jaw! At the time, I was thinking , 'Oh no. What have I done here?'

"I think they cited me more than 24 hours after, and it couldn't go through. I remember Rob Andrew, who was the Newcastle director of rugby at the time, was talking about stepping down if they didn't cite me. It was obviously my fault, and I shouldn't have done it."

O'Brien recalls that Wilson 'was in a bad way' after the incident, and says he offered his apologies.

Also, during the show, Toby Flood recounted the brutal Leicester Tigers initiation that invited any new signings or academy graduates to try touch the back of the bus.

The invite was eventually opened to all comers that felt brave enough to run the gauntlet. There was, of course, a catch:

All this was done, as Flood explained, just days out from some big Premiership matches.

That old Tigers side were just made of different, wilder stuff. Even Sean O'Brien would not have fancied regular bus trips with that crew.

popular
Incredible case of the only known individual whose parents were two different species
TikTokers are utterly convinced there is a secret zombie apocalypse going on in China right now
Darius Danesh opened up about his health struggles before his tragic death aged 41
Pop Idol star Darius Danesh found dead aged 41
Jamie Foxx and Snoop Dogg's vampire movie surges to the top of Netflix charts
People are sharing 'evidence' that history's biggest event was staged by humans
Brits who snore could get £156 in DWP benefits every week
You may also like
Sport
The FootballJOE Pub Quiz: Week 50
Sport
Man United now open to selling Cristiano Ronaldo this transfer window
Sport
"I cannot believe how Nunez thinks he's going to get away with that!" - Jamie Carragher
Sport
Jurgen Klopp reacted like everyone else to Darwin Nunez headbutt red card
Sport
Gary Neville and Jamie Carragher in full agreement on Man United's worst transfers of post-Fergie era
Next Page