This could be the straw that breaks the camel's back for Stuart Lancaster.

In a move that has surprised precisely nobody, Sam Burgess has told Bath Rugby he is leaving rugby union, having signed a deal with his old rugby league side. He was a rugby union player for 372 days.

The 26-year-old, who made his name in rugby league with Leeds Rhinos and South Sydney Rabbitohs, was heralded as the wrecking-ball answer to England's World Cup problems.

Burgess played centre and flanker for Bath Rugby but missed out on England selection during the November Series and 2015 Six Nations. Lancaster named him in England's World Cup squad after making just one international appearance.


He was used as an impact sub for the opening win over Fiji but promoted to start alongside Brad Barritt for the crucial match against Wales, which England lost. 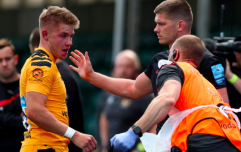 END_OF_DOCUMENT_TOKEN_TO_BE_REPLACED

The selection of Burgess was singled out as a perfect example of the problems within the English rugby team and his decision to return to rugby league is a massive embarrassment to both Stuart Lancaster and the RFU.

Following the World Cup, Bath coach Mike Ford granted him an extended leave of absence while promoting him as a potential flanker for World Cup 2019.

Barring another, unlikely return to union, Burgess will be nowhere near England, or Japan, in 2019. It's unlikely Lancaster will be either.