Those New Zealand boys are alright.

Between Sonny Bill Williams, Beauden Barrett and Nehe Milner-Skudder, the New Zealand rugby team are winning over fans with their humble attitude after beating Australia to retain the William Webb Ellis trophy. 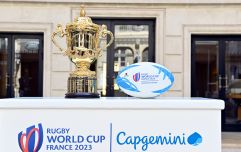 Spain banned from competing at the 2023 Rugby World Cup

END_OF_DOCUMENT_TOKEN_TO_BE_REPLACED

The All Blacks returned to New Zealand on November 4 - the day that would have been the 35th birthday of former All Black Jerry Collins.

Capped 48 times as a Kiwi, Collins was well-known and liked on these shores. He spent two seasons in Wales with the Ospreys, but it was his time in Devon which stands out for most.

Following the 2007 World Cup, Collins was holidaying in the south of England when he was spotted by the coach of local rugby team Barnstaple, who asked him to come down to the team's next match. Collins agreed and surprised the team by taking them for a training session.

When it was over, club members thanked him and asked if there was anything they could do to repay him, to which Collins replied that he would like to play a match for the team. 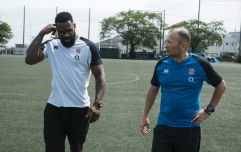 END_OF_DOCUMENT_TOKEN_TO_BE_REPLACED

Collins and his partner were tragically killed in a car crash in June of this year, but with this tribute his former teammates showed that he was gone but not forgotten.

popular
Groom slammed for going to own wedding to bride, 16, in jeans and t-shirt
Woman reveals cruel reason date dumped her after they had sex for the first time
Topless mum in her undies rescues pet goose from bald eagle in crazy video
The JOE Friday Pub Quiz: Week 295
Kylian Mbappe asked PSG to sell Neymar and replace him with Ousmane Dembele
Confusion as woman appears to fart during viral clip of Depp-Heard trial
The never-before-seen extended version of Louis Theroux's rap has been released for the first time
You may also like
Food
Strong Zero: The Japanese 9% ABV low-cost cocktail in can that is becoming a cult favourite in the West
Sport
'There is no way that Wales are going to win the World Cup' - Mike Tindall
Sport
England rugby players apparenty lost £100k thanks to kit man's poor investment advice
Sport
Nigel Owens explains how the integrity of rugby was summed up with one David Pocock embrace
Sport
New Zealand's World Cup victory parade was wonderfully short on frills (Video)
Next Page