"I will burn you, banana eater."

A Cameroonian rugby player has said he was racially abused by an opponent during his side's opening match of the season.

END_OF_DOCUMENT_TOKEN_TO_BE_REPLACED

On Friday evening, Christian Ambadiang was playing for Nevers in their match against Provence Rugby in the Pro D2, the second division of French rugby.

In an Instagram post after the game, Ambadiang claimed that he had been the victim of disgusting abuse from an opposition player.

Ambadiang says that a Provence player said to him "Je vais te brûler, mangeur de bananes" - which translates as "I will burn you banana eater."

He adds that the player later said he made the insult in the "heat of the moment" and that referees "tend to turn a blind eye" to racist abuse on the pitch. 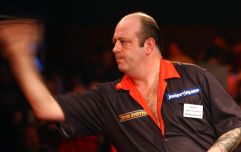 The player who made the comment to Ambadiang has not been named, but his club have released a statement condemning the abuse and apologising to the Nevers player.

END_OF_DOCUMENT_TOKEN_TO_BE_REPLACED

It reads: "Provence Rugby learned yesterday that Christian Ambadiang, player from Nevers, was the victim of racist insults by one of our players.

"Despite the latter's apologies, and his faultless behavior since his arrival at the club, this is unacceptable. This indeed the club's project, which has made tackling societal issues one of its reasons for existing.

"Provence Rugby would like to apologize to Christian Ambadiang and, more generally, to all those who may be shocked by the situation. We are too."

The statement adds that the club are speaking to the player in question and will be punishing him accordingly.

Stars of the sport have also condemned the abuse.

Life ban for that scumbag
No more no less #NoToRacism https://t.co/SIC6oLJO8n

According to Le Journal du Centre, Nevers have submitted a report to the National Rugby League, the governing body for professional rugby in France.