“At some stage, your own pride has got to kick in as a professional footballer”

Manchester United’s iffy start to the season has been well documented, with many placing the blame at the feet of manager Jose Mourinho.

United place just sixth in the table, eight points off a Champions League spot, and there have been many stories about Mourinho not getting on with his players.

Ahead of United's clash with Liverpool on Sunday though, Roy Keane has said that Mourinho is not the only one to blame, and the players need to step up and put more work in.

"At some stage, the players have to take responsibility," Keane said with typical fiery passion, on Sky's Super Sunday.

"At some stage, the players have to take responsibility." 👊


"I know people say Mourinho has got to get players onside, but you’re talking about a lot of international players here." 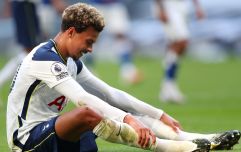 END_OF_DOCUMENT_TOKEN_TO_BE_REPLACED

"If you’re out on that pitch, and you’re not looking after the ball, or you’re sloppy in possession, that does come down to the player."

"At some stage, your own pride has got to kick in as a professional footballer, no matter who the manager is."

"If you’re unsure what team is going to turn up… you are in trouble."

Roy Keane went on to say that today's game was a big opportunity for the players to prove themselves.

'Whatever happens today, Mourinho wants to look at his players, and win lose or draw… they are all going to fight the cause. They are going run, they’re going to close people down, they are going to roll their sleeves up. We’ve all been there, you can’t win every week. But if you are going to lose football matches, roll your sleeves up and dig in."

"That’s why there are huge question marks, why he obviously seems not happy with Pogba, Lukaku, and one or two others. And it doesn’t look good."