We all knew what was coming...

As soon as we saw ITV announcing Roy Keane, Gary Neville and Patrick Vieira as part of their pundits panel for Euro 2020, we all knew the clash at the Highbury tunnel would come up.

END_OF_DOCUMENT_TOKEN_TO_BE_REPLACED

For the uninitiated, Keane went gunning for Vieira in the tunnel of Arsenal's old home ground before his Manchester United side went on to secure a vital league win.

Keane had taken offence to Vieira cornering Neville, his United teammate, outside the dressing rooms and telling him his card was marked, after a fraught match at Old Trafford, in their previous encounter.

Sky Sports' cameras were in the tunnel and Keane's 'Oi, Vieira!' and 'See you out there' comments immediately went into Premier League lore.

It has been over 16 years since the incident and all three of the main stakeholders have given their take on the matter. Keane and Vieira even re-lived it all in the excellent 'Best of Enemies' documentary.

END_OF_DOCUMENT_TOKEN_TO_BE_REPLACED

It was up to Mark Pougatch, then, to pick over those old bones, and he gave it the old college try. There were no real fireworks on this occasion as Keane and Neville both joked about the clash, while Vieira was not overly keen to go over old ground.

Most, though, wanted Pougatch to ask the blindingly obvious question to Keane - Where has your beard gone? 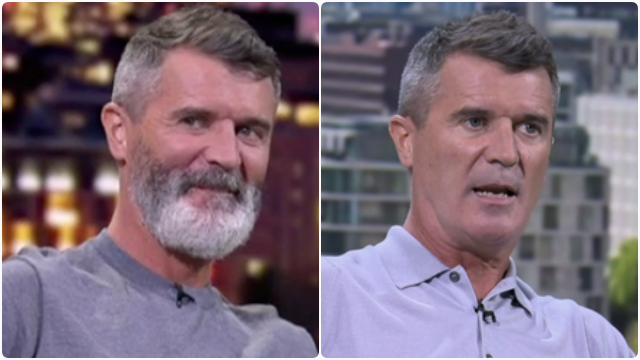 Only 24 hours earlier, Keane was auditioning for the next, suave Captain Birdseye and fetching plenty of positive comments for his svelte new look.

Previewing Italy's clash with Switzerland and the beard was no more.

Roy Keane doesn’t actually shave. He just stares furiously at his face in the mirror and his beard retreats until it’s needed again.

Fear not, though, as the Kent Chronicle had got to the bottom of the story. Keane visited The Hairy Bear barbers, in Bearsted, earlier today for a haircut and shave before reporting for more ITV punditry work.

"Roy had the Hairy Bear special and left a nice tip," Co-owner of the barbers, Donda Michaelas told the outlet. "The staff said he was polite and took a photo with staff at the end.

"For us it’s an absolute privilege to have a legend in like that - even though I’m a Liverpool supporter and [co-owner] Wesley Mason is a West Ham supporter."

Keane was in playful form in the first part of the ITV broadcast, as he started grinning broadly when Vieira spoke about Roberto Mancini allowing his Italian players to express themselves.

"I'm just listening!" he remarked to a teasing Neville. Vieira was up against it again.