At half-time in Lens, England needed more than a result, they needed a new philosophy. Again. There were already signs that some were beginning their routine post-tournament inquisition, unusual in this instance because England had only played one-and-a-half games in the competition.

But they did have form. As Hodgson pointed out at the World Cup two years ago, “all of a sudden, you’ve lost two games and you’re out of the competition before it’s even started.”

END_OF_DOCUMENT_TOKEN_TO_BE_REPLACED

With Wales leading through a Gareth Bale goal which exposed several fault lines in the England team (a lazy foul by Wayne Rooney, a lazy dive by Joe Hart), something had to happen.

Hodgson made radical but necessary change. Raheem Sterling and Harry Kane came off and Jamie Vardy and Daniel Sturridge came on, bringing quality, energy and the simple instruction to save England. 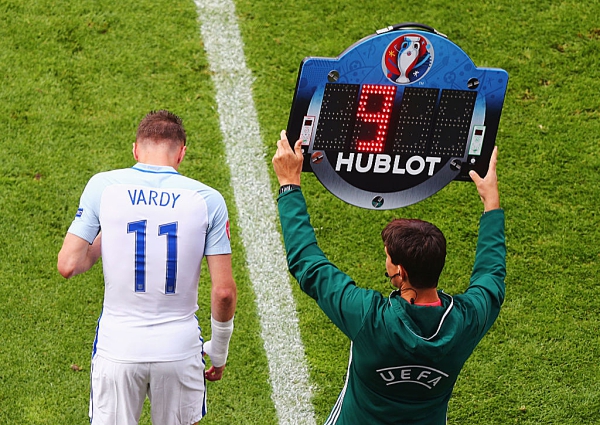 Even though Vardy equalised, Hodgson had soon abandoned all caution. He was dancing as if nobody was watching as he sent on Marcus Rashford in an attempt to secure the victory England needed.

END_OF_DOCUMENT_TOKEN_TO_BE_REPLACED

In the end, Hodgson could claim vindication. England had come from behind to win as Sturridge scored the injury-time goal which allowed them to take decisive step in the competition.

England could yet finish in third place or they could top the group, and they will need an improvement on their performance here in Lens, where they didn’t look like a team which had a 100 per cent record in qualification, if they are to defeat Slovakia. 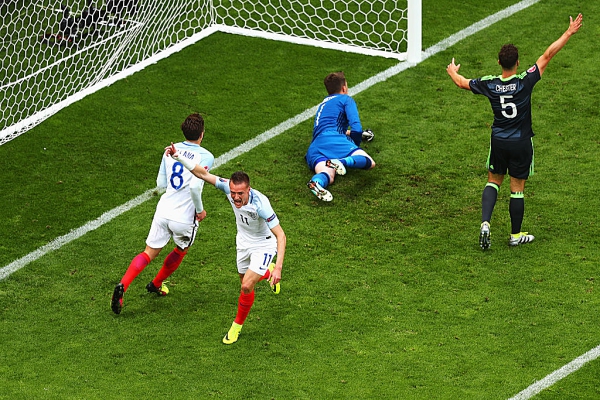 The half-time changes transformed England, but they also gave the sense of a manager still trying to work out, after four years, what is the best way for England to play. Is it the way that comes naturally to the vibrant players in the squad or is it the ponderous Hodgson method, embodied in the slowness of his captain Wayne Rooney?

Rooney improved in the second half, but he had to after a first 45 minutes which provided further evidence of his decline. 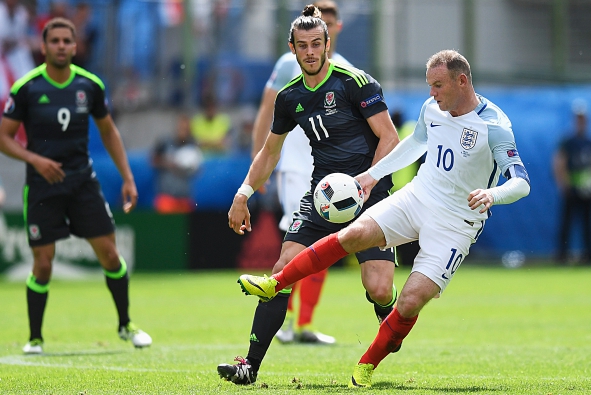 END_OF_DOCUMENT_TOKEN_TO_BE_REPLACED

Others had struggled too. Sterling has carried his club form into the tournament. There was a time when he was a scintillating talent, but his drift continues.

His selection was a mistake because the game against Wales had always seemed like a game for Vardy.

This kind of scuffle energises him. Almost immediately after he was sent on, he tussled with Ashley Williams and held the centre-back down which prevented him getting back to defend, even if Vardy was neutralised too.

The equaliser came quickly when Wales failed to deal with a couple of balls into the box and Williams headed towards his own goal where Vardy could sweep the ball in from an offside position, even though he wasn’t offside.

Wales were shaken by the goal, but they had ended the first half celebrating as Bale gave them the lead.

At that point, the game seemed to belong to them.

By mid-morning the rain had been falling heavily in Lens, giving the town the perfect feel for a game between two British sides. In the local bars and brasseries, Welsh and English fans drank and, occasionally, ate in the rain, but the mood was good.

After the violence in Marseille and Lille, the atmosphere in Lens felt more like how it has been at tournaments where England have been involved in the past ten years.

Of course, there has been no tournament involving Wales in a long time. Gareth Bale’s opening goal against Slovakia was their first in a tournament since Terry Medwin scored against Hungary in the 1958 World Cup.

Hodgson named the same side, but Rooney was taking corners instead of Kane, which was the only development.

On the field, things seemed familiar as well. Rooney’s corners made little difference. England scrapped and battled against a side which was suppose to lack their quality, but which had other virtues, most notably a simplicity to their play. 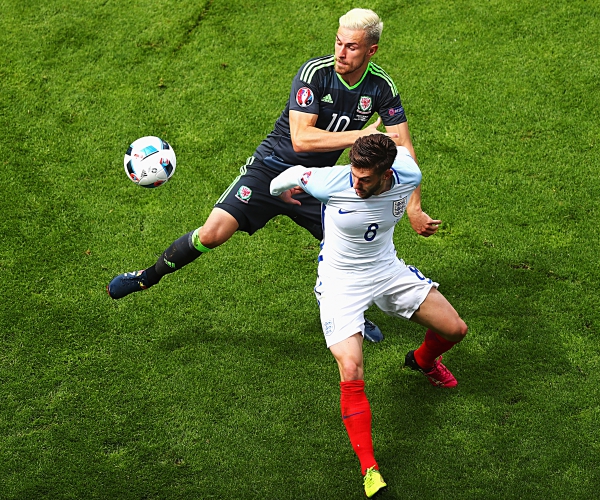 For 45 minutes, it was hard not to wonder what Hodgson has been doing as England’s manager since 2012. Wales were the well-organised side, while Hodgson’s players seemed to be making it up as they went along, but not making up anything inventive. They were instead like the bore who corners you at a party and insists on telling you long, intricate stories about the contents of their garden shed.

The game was dull too. Bale’s only real involvement before the goal was an acceleration and shot which demonstrated what he was capable of.

England believed that players like Sterling represented a glorious future at one time, but it wasn’t happening, his day summed up by the chance he missed early on. 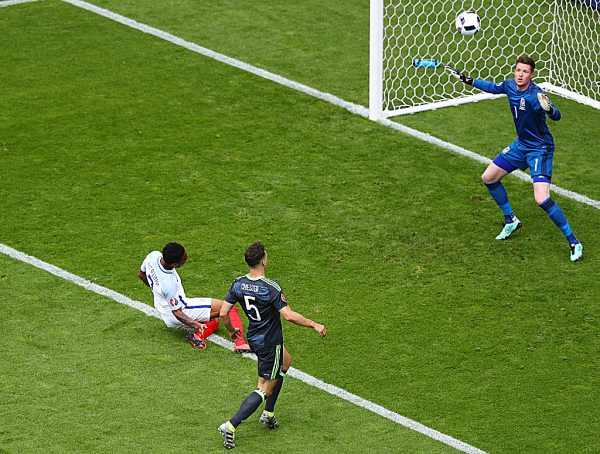 Rooney was the future once, but here he was nutmegged by Joe Allen during a first half when he was swamped by Wales midfielders who had watched how Russia had stood off and did the opposite.

England seemed surprised by this tactic as if they expected Wales to sit back as they only really needed a point to one close to qualification.

Certainly that would have been the Hodgson way. Those who doubt the power of the manager to have an influence in modern football could look at the first half as a rebuttal of that argument.

The changes at half-time represented something profound. Hodgson had to embrace change and even if he might not be too sure how he got there, he had made the decisions which brought England victory.

At the end, Ashley Williams gathered his players in a huddle on the pitch. He could tell them how close they had come and how much they can still achieve.

Hodgson had celebrated wildly at the end, or as wild as he can get. At half time, he had liberated the England team and he had been rewarded for it.

popular
Two British men raped in Spain after being 'drugged while out on night out'
Groom shocks wedding by playing video of his bride cheating with her brother-in-law
Man has hand 'chopped off' outside working men's club in attack like 'a horror film'
Brit tourist, 22, ‘raped by wealthy American holidaymaker in hotel toilet’ in Mykonos
Runner finishes last in 400m race as penis keeps falling out of shorts
British woman who told Dubai police she'd been raped is arrested for extra-marital sex
Some Stranger Things fans are now trying to cancel Metallica
You may also like
Sport
Inside the UK's biggest sports bar - set to open ahead of 2022 World Cup
Sport
Gary Lineker criticised for tweet after England's Euro 2022 victory
Sport
Eddie Jones clashes with Australia fan calling him 'traitor' after England win
Sport
England to wear home kit against Northern Ireland to avoid colour blind clash
Sport
Danny Care returns as England name strong team for Australian decider
Next Page