"Going away from home, we had to meet them horn on horn."

And that was only the start of it. 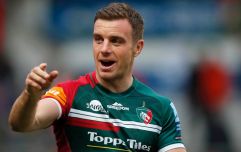 END_OF_DOCUMENT_TOKEN_TO_BE_REPLACED

Leinster went to Franklin's Gardens on Friday night and did a complete number on a Northampton Saints side that finished their Champions Cup loss with only 13 men.

Leo Cullen's side recovered from a mid-game dip to finish with a flourish and get a vital bonus point victory. Saints ended up with Dylan Hartley sent off and George Pisi in the sin-bin - both were for high tackle offences.

One of the key battles Leinster bossed was the scrum and tighthead prop Tadhg Furlong was a massive part of that dominant set-piece.

In a post-match interview with BT Sport, Furlong spoke of locking horns with the Saints front row and Ronan O'Gara was loving it.

The interview was then made even more memorable when a jolly Irish fan crashed in and told the watching world about Furlong beating his brother in a fight.

It was another monster game from Furlong but, he knows, the job is only half done.