Not a bad second choice

Roma have identified their next top priority in the transfer window after their move for Malcom fell through at the last hurdle. It was announced on Twitter that Roma had agreed a fee with Bordeaux for the Brazilian winger and that he would sign the following day, subject to a medical.

END_OF_DOCUMENT_TOKEN_TO_BE_REPLACED

Barcelona then scuppered the deal, persuading the player to ditch the Roma deal and change his flight to Rome for one heading for the Catalan capital.

Roma were bitterly disappointed by the breakdown of their agreement with Malcom, but just most people do after a heartbreak, they've bounced back and identified their next target.

According to the highly reputable Gianluca Di Marzio, Bayer Leverkusen's Leon Bailey has emerged as Roma's top transfer target. The Jamaican winger has lit up the Bundesliga over the past year and a half, scoring 12 goals last season from the wing. His pace is his main weapon, but he is also composed in front of goal and possesses tremendous dribbling ability.

Leverkusen would reportedly demand a fee of around €40m; peanuts for a player with his potential in this market. 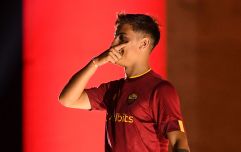 END_OF_DOCUMENT_TOKEN_TO_BE_REPLACED

He very much fits the same profile as Malcom: a young, fast, tricky, left-footed winger. In fact, you could argue that he has a higher ceiling than the Brazilian.

Both Chelsea and Arsenal were also linked with Bailey this morning by The Sun, as the London clubs are also in the market for a direct winger. Chelsea could potentially lose both Willian and Eden Hazard in this window, to Manchester United and Real Madrid respectively, so a player of Bailey's profile would significantly soften the blow.

Arsenal, meanwhile, don't have any proper wingers in their squad, after selling Theo Walcott and Alexis Sánchez in the same window last January. A player with pace and good movement to complement's Mesut Özil's vision is exactly what they need. This could easily turn into a three-way tug of war with Bailey in the middle.

popular
Incredible case of the only known individual whose parents were two different species
TikTokers are utterly convinced there is a secret zombie apocalypse going on in China right now
Pop Idol star Darius Danesh found dead aged 41
Darius Danesh opened up about his health struggles before his tragic death aged 41
Jamie Foxx and Snoop Dogg's vampire movie surges to the top of Netflix charts
People are sharing 'evidence' that history's biggest event was staged by humans
Darius Danesh pictured with Gerard Butler before his death
You may also like
Sport
Jose Mourinho burst into tears after guiding Roma to Europa Conference League final
Sport
Jose Mourinho is blaming referees after dropping points, again
Sport
Roma 'under investigation' after Mourinho hired ex-referee who illegally confronted official
Sport
Jose Mourinho holds showdown talks with Roma after worst start in 43 years
Sport
Jose Mourinho hits out at another reporter as he claims 'you are not intelligent at all'
Next Page