Roberto Mancini is nothing if not forthright. He doesn't mince his words and tells it like it is. Sometimes his frank nature can land him in hot water, but at least you can rely on him for an honest response. 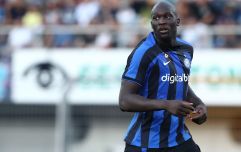 END_OF_DOCUMENT_TOKEN_TO_BE_REPLACED

That said, we kind of wish he had kept his own council on this particular occasion - partly because we are now left with a somewhat unnerving image in our heads that we really didn't want or need.

The Inter Milan boss was talking to the Italian press when the subject turned to the uncertain future of Mauro Icardi. There are strong rumours that the 23-year-old striker is looking for a move away.

Mancini claimed there was nothing to it, and that the player was training as normal with the club.

To stress his indifference, he claimed he didn't even pay attention to the papers or rolling news...but did quite enjoy the odd bit of adult entertainment.

"I have not seen the news you mentioned, I have not read anything.

I do not know why say anything. I’m just a coach and this is not an issue about me. He is doing the training and showing endeavor, for me this is important.