Roberto Firmino's stats from Liverpool's loss to Watford are horrendous

Very few Liverpool players performed with much distinction during their 3-0 loss at Watford.

Goalkeeper Adam Bogdan, on his league debut for the club, gifted the home side the lead after he bundled the ball from a corner into Nathan Ake's path. But even the hapless Hungarian's display couldn't distract from the sheer awfulness of Roberto Firmino's performance. 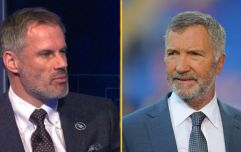 END_OF_DOCUMENT_TOKEN_TO_BE_REPLACED

The Brazilian forward was signed from German club Hoffenheim last summer for a fee in the region of £29 million. However, an excellent showing against Manchester City aside, he has struggled thus far at Anfield.

The only consolation for the 24-year-old is that he surely can't ever play this badly again.

Firmino failed to have a shot on-target, dribble past an opposition player, complete a cross or create a chance for a teammate. He also misplaced almost half his passes.

And worst of all, the forward was also caught off-side. A lot.


Plenty more to moan about with Liverpool today, but Roberto Firmino is an absolute git for an offside.

It looks like he has plenty of work to do in the new year to get up to speed.

popular
Eddie Hearn: Billy Joe Saunders will be out for a 'long, long time' after injuring eye
Elon Musk revealed he has Asperger's syndrome on Saturday Night Live
The JOE Friday Pub Quiz: Week 242
This Billy Joe Saunders fan is probably regretting his choice of tattoo
Families will be allowed to hug each other from May 17, says Michael Gove
Andy Burnham says 'Labour should get in touch if they need me' after election result
A definitive ranking of every swear word from worst to best
You may also like
Life
Joyous scenes as clubbers return at Liverpool test event
Sport
The humiliation of the arrogant Super League is a moment we should all savour
Sport
John W Henry releases apology video to Liverpool fans and staff over Super League plans
Sport
Jordan Henderson calls meeting of Premier League captains to discuss Super League response
Football
Bill Shankly’s grandson asks for statue to be removed from Anfield
Next Page