Rob Kearney will be packing his bags soon and getting ready to end his playing days under the blazing Australian sun.

END_OF_DOCUMENT_TOKEN_TO_BE_REPLACED

The former Leinster full-back, who may have also played his last game for Ireland, is joining Western Force on a one-year deal and immediately adds some title-winning heft to their squad.

"Having conquered the European club and international landscape for over a decade," the Force statement notes. "Kearney is delighted for the opportunity to ply his trade in Western Australia."

For Kearney, the move represents a great way to challenge himself after 13 seasons with Leinster. He has won all there is to win at club level and even has a 2012 European Player of the Year accolade, as well as two Lions tours, on his burgeoned CV. 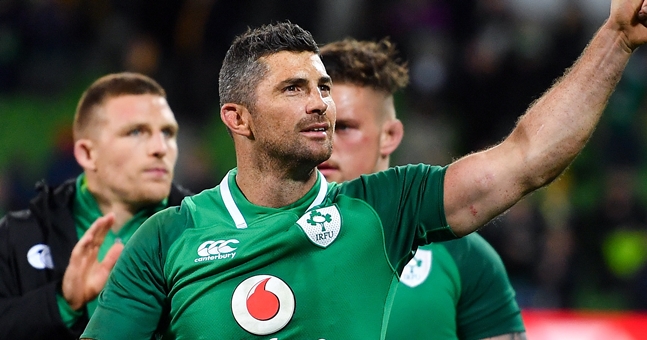 There had been talk of Kearney finishing out his career in Japan's Top League but the Covid-19 pandemic may have impacted that route. Instead, the 34-year-old is heading Down Under and is more than capable of doing a job for the Force. He toured Oz in 2018 with Ireland and played a key role in Ireland's first series win there in four decades.

"I hope to add value both on and off the field that complements the high ambition of the club," says Kearney.

"I’m particularly excited to immerse myself in a new performance environment and to play both with and against some of the best players and teams in the southern hemisphere. I look forward to moving to Western Australia to begin building relationships with my new teammates and coaches alike and to meet the ever-growing Western Force fan base which also includes a strong Irish contingent."

Newcastle vs Tottenham suspended due to medical issue in the crowd

END_OF_DOCUMENT_TOKEN_TO_BE_REPLACED

Kearney twice noted the ambition of Western Force and the franchise's head of rugby (and record caps holder) Matt Hodgson did state that further signings would be announced in the coming weeks.

Their new signing also addressed the current realities of the Perth-based side, mentioning they are "looking to improve on this year’s campaign". That one is an under-statement. Force finished fifth out of the five sides in Super Rugby Australia, this year, after losing all eight games.

Force have had some top quality players over the years since their 2006 inception, but they have always swam against the tide. Matt Giteau, Nathan Sharpe, James O'Connor and Drew Mitchell have all lined out for the Force but retaining players in the W.A. post has always proved difficult. It is hard enough for Australian rugby to hang onto their top stars and harder still when you are away from the bright lights and big city feel of Australia's East Coast.

At present, the squad has former Connacht back Kyle Godwin, with Greg Holmes, Nick Frisby and Jeremy Thrush the other notables. Signing Kearney is a massive boon, and he will be up for the challenge, but he could do with a bit more quality around him if Force are to drag themselves off the bottom in 2021.