Argentinian fans are a different breed

Cast your mind back a few months to the circus that surrounded the two-legged final of the Copa Libertadores between arch-nemeses from Buenos Aires, Boca Juniors and River Plate. The tension around 'the final to end all finals' was so strong that it overspilled into violence before the second leg, as River fans attacked the Boca Juniors team bus, preventing the game from going ahead. 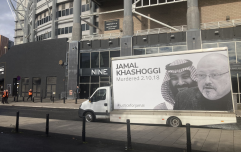 END_OF_DOCUMENT_TOKEN_TO_BE_REPLACED

This gave us a taste of the importance of football in Argentina, where to many, it seems to mean everything. It's the central form of their identity, and their lives revolve around their football teams.

I guess, then, it shouldn't come as a surprise to see a River fan get a tattoo of a QR code that, when scanned on a smartphone, takes you to a video of the goals River scored in that final against their eternal rivals.

But to football on these shores, it's like nothing we've seen before. The innovation, the commitment to hating your local rivals, the pettiness, is all to be applauded.

The below video demonstrates how the tattoo works.

A River Plate fan just took the tattoo game to the next level with a QR code that shows the Copa Libertadores final goals against Boca Juniors whenever you scan it with your phone. Argentinian football fans are something else. pic.twitter.com/EizugHtkid

Unfortunately for this specific River fan, the functionality of his tattoo relies on the video always being live on YouTube. Some mischievous fans on Twitter noticed this and set about lobbying to get people to report the video until it was taken down for copyright infringement. And it worked.

Bad news to this River Plate fan as the video of the goals has been taken down off youtube due to copyright issues, his tattoo is basically just a meaningless barcode now. https://t.co/HKiwkwrnlc pic.twitter.com/fpq26RB1t7

So now, this poor fan is stuck with a bar code on his leg that links to an unavailable video. Still, River won the final and that's the real quiz.