The Foxes have appointed Claude Puel as Craig Shakespeare's successor. The Frenchman has signed a deal until the end of the 2019/20 season, and he'll be in the dugout for Sunday's visit of Everton.

Puel was Southampton manager last season, but left in the summer after just one campaign in-charge. The 56-year-old led the club to eighth-place in the Premier League and the final of the EFL Cup, where they lost to Manchester United at Wembley. However, some Southampton supporters found Puel's tactics to be defensive, while several players reportedly disliked his rotation policy, leading to an unsurprising exit in the summer.

#lcfc are delighted to announce the appointment of Claude Puel as the Club’s new First Team Manager: https://t.co/OQeKNdlHWF#WelcomeClaude pic.twitter.com/RRgEdELdhy

Puel's appointment as Leicester manager has come as a surprise, but he has a track record of success in his native France. Puel won the French title as Monaco manager in 2000, he helped Lille qualify for Europe during his six-years in charge and was manager when Lyon reached the semi-finals of the Champions League in 2010. He also had a stint in-charge of Nice before becoming Southampton manager.

Puel isn't exactly the most glamorous manager Leicester could have appointed, but he's an experienced coach with a perfectly credible CV. Puel becoming Leicester manager is also unlikely to offend anyone - other than Richard Keys.

Keys seems to view the appointment as an end of days scenario, seeing it as the final nail in the coffin for British coaches, and maybe even Britain itself.

The beIN Sports presenter tweeted a screenshot of an article about Puel's appointment and simply wrote "RIP British coaching."

Keys appears to view the sacking of an English manager and subsequent appointment of a Frenchman as a watershed moment for Proper Football Men everywhere. He's probably wondering why they didn't give it Giggsy 'till the end of the season? Or asking why Leicester didn't appoint Tim Sherwood. He may have contributed to Swindon Town getting relegated from League One, but Tim is a young British manager, he knows the game, he would've went in there and got them organised. What about Ron Atkinson, is he still around?

The former Sky Sports presenter evidently has an issue with "foreign" coaches in the Premier League, but, otherwise, he has no issues with migrant workers. He and his colleague Andy Gray are British but live and work in Qatar, a country in the Middle-East which is using migrant workers to build stadiums for the 2022 World Cup. These indentured labourers live in abhorrent conditions and hundreds die every year working on construction sites. They are effectively slaves.

No, Keys is fine with that.

I know you like accuracy @ColinMurray. Been doing some checking. 3500 workers on 5 stadia sites 6 million hrs worked - no fatalities. 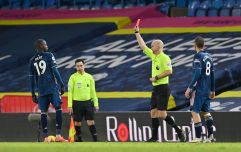 END_OF_DOCUMENT_TOKEN_TO_BE_REPLACED

Migrant workers in other fields, and modern slavery, is okay.

But when a club in a league where two-thirds of the players aren't from Britain - a club owned by a Thai businessman - appoints a non-British manager, this is a truly awful thing for Keys.

Let's not forget Moyes, Rodgers and Sherwood were all given top jobs with huge clubs last few years.

Which British managers applied for it Richard?

Or just a club bringing in someone who has managed at top level 18 years, won a title, got to a UCL semi-final & worked magic with Ben Arfa.

Mate if you love Britain and the Brits so much why do you live in Doha? Sun? Sand? Human rights??