Valencia walked off the field during their game vs Cadiz

The referee's report for Valencia's 2-1 loss to Cadiz has revealed more details of allegations of racist abuse made by Mouctar Diakhaby against Juan Cala on Sunday. 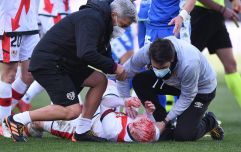 END_OF_DOCUMENT_TOKEN_TO_BE_REPLACED

Valencia's players walked off the pitch during their La Liga game with Cadiz after Mouctar Diakhaby claimed he was racially abused by an opponent.

The game was little over half an hour old when it became clear that Diakhaby had been angered by Juan Cala, with the pair seen exchanging words as play continued around them.

The Valencia team has walked off the pitch after an altercation between Mouctar Diakhaby and Juan Cala, with the French defender visibly angry at what was said.

The French defender had to be held back by teammates, with Valencia's team opting to walk off the field of play soon after.

Play did eventually restart, but Diakhaby did not return to the field when it did: replaced by Hugo Guillamón.

Reports have claimed Diakhaby was devastated by the incident, but gave his blessing for his teammates to continue the game without him. 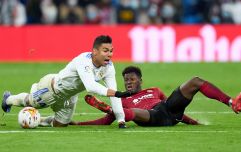 Valencia could be fined over tweet about Real Madrid refereeing decisions

END_OF_DOCUMENT_TOKEN_TO_BE_REPLACED

Valencia captain Jose Luis Gaya has since said the players returned to the field after officials told them if they didn't, they would sacrifice three points.

In referee David Medie Jimenez's report, he states that: "In the 29th minute I stopped the match due to a confrontation between players from both sides. Player number 12 of Valencia C.F., Mouctar Diakhaby, once booked for arguing with an opponent, tells me word for word: "He called me a s***** black man" in reference to player number 16 of Cadiz C.F. Juan Torres Ruiz (Juan Cala).

"This fact was not perceived by any member of the refereeing team. After a few moments, Valencia C.F. decide to abandon the pitch. For this reason, the match is temporarily suspended. Both sides enter their respective changing rooms. After a few minutes of suspension, the Valencia C.F. delegate David Rangel Pastor, in presence of the Cadiz C.F. delegate Antonio Navarrete Reyes, tells us that they decide to substitute player number 12 Mouctar Diakhaby and continue with the game.

"Moreover, it was agreed to give both sides a five-minute warm-up in order to avoid injuries. The match was resumed 24 minutes after suspending it, and was carried out as normal from that moment onwards."

Valencia president Anil Murthy has called for a full investigation into the matter and said the club "will defend Mouctar Diakhaby to the fullest."

Juan Cala will speak to the media after Cadiz's training session on Tuesday, and has told Spanish TV reporters he is "relaxed" about the allegations.

Cadiz have said they "do not doubt the honesty of all members of our squad."