It did not go the Lions' way at Eden Park. There were some real high points but they were distinctly second best for long periods.

All Blacks coach Steve Hansen was asked, by an optimistic Sky Sports reporter, before the game if the First Test was between the two best teams in world rugby.

END_OF_DOCUMENT_TOKEN_TO_BE_REPLACED

"Well, I don't know about that," he began, "but what I will say is there is some proud history."

Following another shell-shock, relentless game of All Blacks rugby, you can certainly say the best team in the world were in Auckland. As for the Lions? Second best is all we can say.

The tourists were blighted with the same issues that have dogged them since they arrived in New Zealand - cutting edge and scoring opportunities created but the final pass not sticking. They should have scored four tries but they had to settle for two [including Rhys Webb's consolation score].

The lineout was okay and the scrum struggled once the frontliners went off. No Lions forward aside from Sean O'Brien carried for more than 20 metres of gains.

END_OF_DOCUMENT_TOKEN_TO_BE_REPLACED

There were 21 turnovers conceded to the All Blacks' 14 but the number of penalties conceded will disgust Warren Gatland and so many of his players. Whereas the Lions only gave up four penalties against the Maoris, Jaco Peyper penalised them 11 times at Eden Park.

Following the match - a 30-15 loss - Peyper's referee microphone picked up some angry comments directed at him by Johnny Sexton, with O'Brien also seen remonstrating. Not long after the final whistle, Sexton complained:

"You give them everything!" 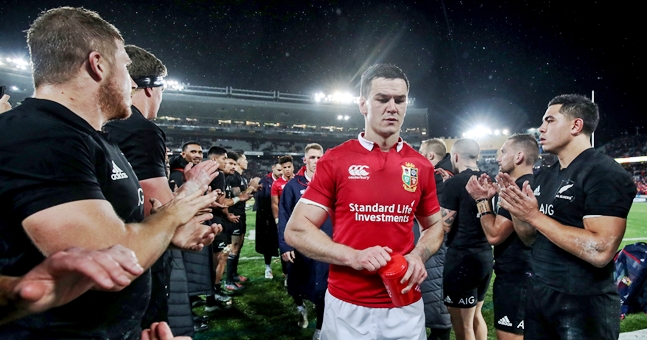 This is not the first time Sexton has spoken out about match officials being biased in certain aspects towards the home team. When Mathieu Raynal was looking back at a video replay of a George North tackle in the win over Crusaders, Sexton moaned:

"You check everything for them and nothing for us."

END_OF_DOCUMENT_TOKEN_TO_BE_REPLACED

The Ireland outhalf has a right to be frustrated but he will have to check himself before approaching referees again, during and after games.

During the match itself, Sky Sports were forced to apologise when Tadhg Furlong was unhappy at the AB's scrum encroaching before the ball was even put in to a scrum. On the 26-minute mark, Furlong proclaimed:

Peyper held up the scrum for several moments and it re-set before Aaron Smith eventually fed the ball in.

A tough night at the office for the Lions but there are still two massive Tests to go.