Zaha is reportedly keen to leave Selhurst Park this summer

Paris Saint-Germain are among a number of leading European clubs interested in signing Crystal Palace winger Wilfried Zaha, according to Sky Sports. 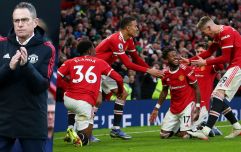 END_OF_DOCUMENT_TOKEN_TO_BE_REPLACED

The Ligue Un champions, compatriots AS Monaco and Bundesliga giants Borussia Dortmund are said to be interested in bringing in the 27-year-old.

Zaha, who was an ever present for Roy Hodgson's side last season, has made clear his desire to leave Crystal Palace, almost six years after returning to his boyhood club after his failed stint at Old Trafford as a youngster.

The Ivory Coast international has often been a talisman for Hodgson's team over the years, but with the Palace squad one of the oldest in the Premier League and showing little signs of improvement, it is understood the time is right to try and prove himself on a higher stage.

Should he move for the expected fee - between £40m and £50m - Manchester United will be set to receive as much as 25 percent of the fee Palace receive, as part of the deal which took Zaha back to Selhurst Park in February 2015.

That situation leaves open the theoretical situation in which United sign Jadon Sancho from Borussia Dortmund and make a bit of money on Dortmund's potential replacement.

That all, of course, is a hypothetical, and would also rely on Ed Woodward actually completing the Sancho deal before the end of this century.