The Premier League has announced that it will continue its support for LGBT charity Stonewall's Rainbow Laces campaign this weekend.

The campaign - set up to show support and solidarity with LGBT footballers and foster inclusivity within the sport - has been running since 2013. 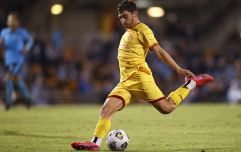 Pique and Griezmann among stars to praise footballer for coming out

END_OF_DOCUMENT_TOKEN_TO_BE_REPLACED

The Premier League has also announced it has joined the TeamPride coalition - also established by Stonewall - which it says in a statement is 'committed to encouraging fans, players, sports clubs and organisations to show their support for LGBT people'.

Not a single Premier League player has come out during their playing days, though former Aston Villa and West Ham United midfielder Thomas Hitzlsperger did so after retiring, and LA Galaxy's Robbie Rogers retired after coming out in February 2013, only to return to the game several months later.

This marks a sharp contrast from the women's game, where a number of footballers in the LGBT community have played in World Cups and been welcomed within the sport.

"The Rainbow Laces campaign complements the work clubs are doing to promote inclusion and diversity in their stadiums, and across all levels of the sport," said Richard Scudamore, the Premier League's executive chairman.

"Our support for the campaign, and the decision to become members of TeamPride, is further recognition that the LGBT community is a vital and integral part of our community."

The EFL is also backing the campaign, with the league changing its logo to incorporate rainbow colours and issuing a statement in which it confirms its support for activities being carried out at football grounds up and down the country.

The campaign has already received support from within the football world, and many will hope this continues well beyond this weekend.

READ: Sport is for everyone. #htafc is wearing #RainbowLaces to show LGBT fans & players are equal at our Club https://t.co/8CUjjb4mrb (AT) pic.twitter.com/su22cF16IR

popular
UK will 'stand shoulder to shoulder with Ukraine' but 'extremely unlikely' to send troops - Raab says
New Highway Code rule will fine drivers £1,000 for opening door with wrong hand
Bookmaker received $420,000 worth of bets on controversial Arsenal yellow card
Motorcyclist dies in crash live on TV while trying to escape police
Woman who saved enough to retire by 26 reveals three golden rules she stuck to
Tory MP claims she was sacked as her 'Muslimness was raised as an issue' in No10 meeting
Dermot O’Leary stunned by definition of ‘grassilingus’ sex term
You may also like
Entertainment
Horror icon Chucky has come out as an LGBT ally and fans are loving it
News
Police offer £20k reward for info on homophobic murder in Tower Hamlets graveyard
Life
Casualty producers announce show will get its first transgender character
Social Media
Playboy makes history with Bretman Rock as first gay male cover star
Politics
Transgender people should not have right to self-identify without medical checks, says Liz Truss
Next Page