Pokemon Go is completely taking over the Borussia Dortmund team

In just a matter of days, Pokemon Go has become a ridiculously big deal.

In the last couple of days, it's proved impossible to leave the house without seeing people - kids and grown-ups alike -wandering about pointing their phones in every direction in their quest to find Pikachu and friends. 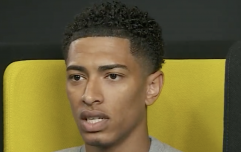 END_OF_DOCUMENT_TOKEN_TO_BE_REPLACED

And it now seems like the craze has even reached the world of professional footballers.

There we were, naively thinking they were devoting all of their waking hours to pushing their bodies to their physical limit as they bid to be in top condition for the new season. How wrong we were.

Just look at this photo tweeted by Borussia Dortmund's left back Marcel Schmelzer...

Currently in Austria as part of their preparations for the new season, it seems many of the Dortmund boys have also been caught up in craze - using a few free minutes on the team bus to seek for new Pokemon. New signing Ousmane Dembélé can be seen engrossed in the game, along with star striker Pierre-Emerick Aubameyang.

As for Schmelzer, he's clearly not got the bug just yet.

Most of the guys are looking for new #pokemon 😳😄🙈 @Aubameyang7 @Dembouz #gonzo pic.twitter.com/a3jQ06XaNa

Dortmund will travel to China in the next week where they will continue their preseason / Pokemon hunting.