Like it or not, Arsenal fans (and let's be honest, you probably don't like it), but Piers Morgan remains your club's most vocal celebrity fan.

The 51-year-old has been an outspoken critic of Gunners boss Arsene Wenger for some time now, frequently sharing his frustrations with the Arsenal boss to his more than 5m Twitter followers.

Similarly to his criticism of Wenger, Morgan has made no secret of his dislike of Arsenal's leading frontman Olivier Giroud. Like many of the club's supporters, Morgan is continually frustrated with Giroud's wastefulness in front of goal and believes that the Frenchman is holding the Gunners from moving on to the next level.

While his criticism is often over the top, few would disagree that Arsenal are in need of more substantial reinforcements in the striker position than the oft-injured duo of Danny Welbeck and Theo Walcott.

So it was hardly surprising to see Morgan angry with the news that Arsenal's Premier League rivals had secured the signature of a worldwide superstar like Zlatan Ibrahimovic on Thursday. 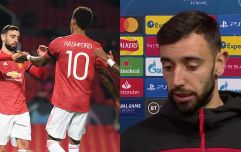 END_OF_DOCUMENT_TOKEN_TO_BE_REPLACED

Arsenal's summer search for a new leading man has been somewhat less fruitless so far, as the club were turned down by Leicester City striker Jamie Vardy.

Despite Wenger and co meeting the release fee in his contract, the Englishman instead decided to remain with the Premier League champions and attempt to repeat this season's heroics.

And of course, miserable bastard that he is, Morgan couldn't resist the urge to connect the dots between Arsenal's failed Vardy bid and United's successful courting of  the one and only Zlatan Ibrahimovic.

popular
A definitive ranking of every swear word from worst to best
34 years on, Peter Shilton still doesn't understand the greatness of Maradona
Tyson Fury: Going bald is beautiful and should be embraced
QUIZ: Name all 50 of these 2000s Champions League players - #3
Can you get more than 12/15 in this childrens' TV quiz?
QUIZ: Can you name all of these Batman villains?
Lidl have released a Pigs In Blankets Pizza for Christmas