PIC: Nicklas Bendtner may have outdone himself with strange 'sex games' post

Nicklas Bendtner does not exist in the same universe as the rest of us.

It may seem like he does since he interacts with our world like everyone else. But just like James Franco, Bendtner actually lives somewhere just outside our comprehension. 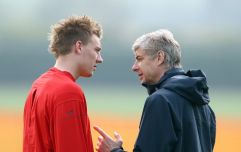 END_OF_DOCUMENT_TOKEN_TO_BE_REPLACED

In Bendtner's world, he is a 10-time Ballon d'Or winner and the undisputed greatest footballer of all-time. It is important to remember this when discussing the Danish striker, who apparently once got a 10 out of nine score on a confidence test during an Arsenal team evaluation.

We hope this goes some way to explaining 'Lord' Bendtner's latest Instagram post, in which he claims he and his wife are 'hot and young, and full of fun' before tagging the post as '#sexgames' and '#cruelintentions'.

Without even addressing the Cruel Intentions part, there's a lot to deal with here. What kind of 'sex games' involved sitting on the headboard of your bed, fully clothed? Why does his wife look just as confused as the rest of us? And who took the photo?