WATCH: Paulinho's keepy-uppies at Barca unveiling don't appear to have gone to plan

News of Paulinho's move to Barcelona came as a surprise to many fans of English football.

The Brazilian is (of course) fondly remembered on these shores for his unsuccessful two-year spell as a Tottenham player. 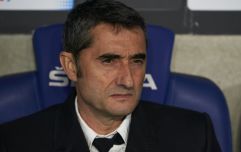 END_OF_DOCUMENT_TOKEN_TO_BE_REPLACED

Having left Spurs a couple of years ago for Guangzhou Evergrande in the Chinese Super League, the 29-year-old returned to Europe this week, inking a deal with one of the continent's biggest clubs.

News of the move was opportunity for some on social media to remind themselves of some of Paulinho's 'highlights' while in the Premier League - one particularly wayward attempt at a shot during a game against Burnley receiving plenty of retweets, for example.

Sadly for the midfielder, people are also poking fun at a short clip of his unveiling as a Barca player.

Appearing for the first time in his new club's colours, Paulinho was thrown a football and expected to show off his keepy-uppy skills to those that had bothered to turn up for his Camp Nou presentation. However, as the video that follows appears to make clear, he didn't exactly impress...

We should point out that the video begins with his keepy-uppies already in full flow and that we've no idea how many he'd managed to complete before his ball-juggling skills let him down. But hey, let's not let that get in the way of a viral tweet...