A classic of the genre

Paul Ince was a very good footballer. He played for Inter Milan, Manchester United and Liverpool, among other teams, and was a talented and combative midfielder.

END_OF_DOCUMENT_TOKEN_TO_BE_REPLACED

As is the case with management, not all good footballers become good pundits. And unfortunately for Ince, he falls into this category. Now, there's nothing inherently wrong with Ince's punditry, it's just that - like a number of other ex-professionals who frequent our televisions on a weekly basis, he doesn't seem all that bothered.

And as so often happens with pundits who aren't too bothered, he can sometimes say things that, well, simply aren't true. This was the case during BT Sport's coverage of the Europa League final, where Ince and the others in the studio were discussing Man City's plans to erect a statue of club legend David Silva.

While Ince was not directly against the idea, he did find it odd that someone like Silva would have a statue, when other legendary footballers don't.

"I don't see a statue of Henry or Bergkamp outside the Arsenal," were his exact words, which you can see in the clip below. 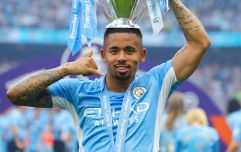 END_OF_DOCUMENT_TOKEN_TO_BE_REPLACED

Unfortunately for Ince, he couldn't have chosen two worse examples, because outside of Arsenal's Emirates Stadium stand two statues of Thierry Henry and, yes, Dennis Bergkamp.

This is all to say that if you are going to go on telly and provide punditry, probably best to do a touch of research first.

popular
Ricky Gervais finally says what we're all thinking about the Johnny Depp Amber Heard case
Binley Mega Chippy: What is it and why is it all over my timeline?
New Time Traveller's Wife series airs 'incestuous' oral sex scene that has left everyone divided
Japanese man spends £12,480 to look like a border collie - and it kind of works
Wimbledon to drop Mrs and Miss on women’s honours board to match men's titles
Gangland enforcer charged £6K to attack victims with acid and £10K to blind them
The JOE Friday Pub Quiz: Week 296
You may also like
Sport
Lucas Torreira issues sarcastic response to Arsenal giving Gabriel Martinelli his shirt number
Sport
Granit Xhaka rips into Arsenal teammates in brutally honest interview
Sport
Arsenal can win the Premier League in next two years, Bacary Sagna claims
Sport
Mikel Arteta trolled with Snapchat filter after North London Derby loss
Sport
Antonio Conte fires back at 'complaining' Mikel Arteta after North London Derby
Next Page