Joe Marler was not a clever boy today. Not at all.

With the Lions leading the Chiefs 3-0, midway through the first half, Marler decided to level Nepo Laulala with a no-arm barge. 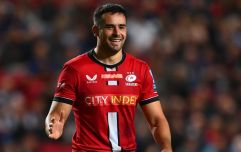 END_OF_DOCUMENT_TOKEN_TO_BE_REPLACED

Off to the sin-bin and his teammates, already under pressure to prove midweeks still mattered, were under the pump. Luckily for the Lions, recent call-up Allan Dell and makeshift blindside Jared Payne did their part in a crucial scrum and the danger passed.

The Lions deservedly won 34-6 in Hamilton to record their fourth victory of the tour and set up the Test squad for a good, old-fashioned tilt at New Zealand.

While we rated the performances of CJ Stander, Jack Nowell, Justin Tipuric and Iain Henderson well, not every player that lined out in red did enough to justifiably call themselves a Test option. Marler did okay but he is nowhere near ousting Jack McGrath, let alone Mako Vunipola.

The New Zealand Herald gave Marler the worst score of their player ratings - 3/10 - and had some scathing comments for him. Andrew Alderson wrote:

It got better for Marler over on Stuff, but not much. The England prop received a score of 5 and was criticised for a "brainless" hit on Laulala that 'overshadowed any good work in the tight'.

Robbie Henshaw had his best game of his tour, so far, but it was once again his defensive scrambling and scrapping that shone, rather than any semblance of cutting edge in attack. Stuff gave Henshaw 6/10 but described some of his attacking play as blinkered.

The Herald was a little less forgiving, with the Leinster and Ireland centre scoring 5. The rating appeared to centre on one mistake in Henshaw's 80-minute outing:

'Gruesome jab with boot in 24th minute. Straight into touch. Blew a potential chase for Daly down left flank.'

Four tries scored. None conceded. Still, the Kiwis merely believe the Lions got the job done over a depleted Chiefs side.

No more, no less.