The news on Friday evening that Arsenal had triggered Jamie Vardy's release clause and are in talks to bring him to The Emirates came as a surprise to almost everyone.

The transfer could be bad news for Olivier Grioud, who surely wouldn't be first choice striker if he was in a squad with an on-form Jamie Vardy.

But when asked about the potential move by Sky Sports, the Frenchman didn't seem at all fazed, and has clearly been briefed on the transfer by Arsenal.

"I have been told that Jamie wants to join us and it's very good news for us. I think we can be complimentary and that's all I can say," he told Sky Sports.

His recent performances for England suggest Vardy isn't at home playing as a supporting striker or a wide player, and in contrast, his performances as the talisman for Leicester this season showed he can be lethal when left up front on his own.

But Giroud thinks the pair can play together at Arsenal, and said even if there aren't plans to switch to a 4-4-2 formation, he felt like competition within the squad is a good thing.

"As I said in the past I am happy with competition. We have always had fantastic strikers at Arsenal and I want the best for this club. Hopefully he is going to help us win this title."


Giroud's interview with Sky Sports essentially confirms what has been widely reported in the media – Arsenal have triggered Vardy's release clause, and are now in talks with the player in order to finalise the details of his contract at the Gunners. 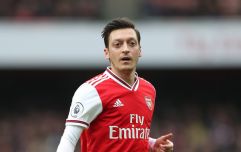 END_OF_DOCUMENT_TOKEN_TO_BE_REPLACED

But there could be further signings in this department, according to Giroud:

"The boss wanted to sign at least one or two strikers, so I expected a top striker and I think it will benefit the club and hopefully [Vardy] is going to score a lot of goals like he did at Leicester."

As is thoroughly predictable whenever there's transfer buzz at Arsenal, fans of the Gunners now firmly believe they are nailed on to win the league. You can see reaction from Arsenal fans here.