The "but he's played no-one" brigade are missing the point

Ole Gunnar Solskjaer looked like a rabbit caught in headlights during his first interview as Manchester United caretaker manager. The club posted a clip of the Norwegian speaking about his pride at getting the job. He looked nervous and almost bewildered at the situation he had found himself in, which was understandable.

But at that point, it was easy to worry about him. Jose Mourinho failed to exert control over the club's expensively assembled squad and it felt like they could potentially chew Solskjaer up and spit him out if they wanted to. 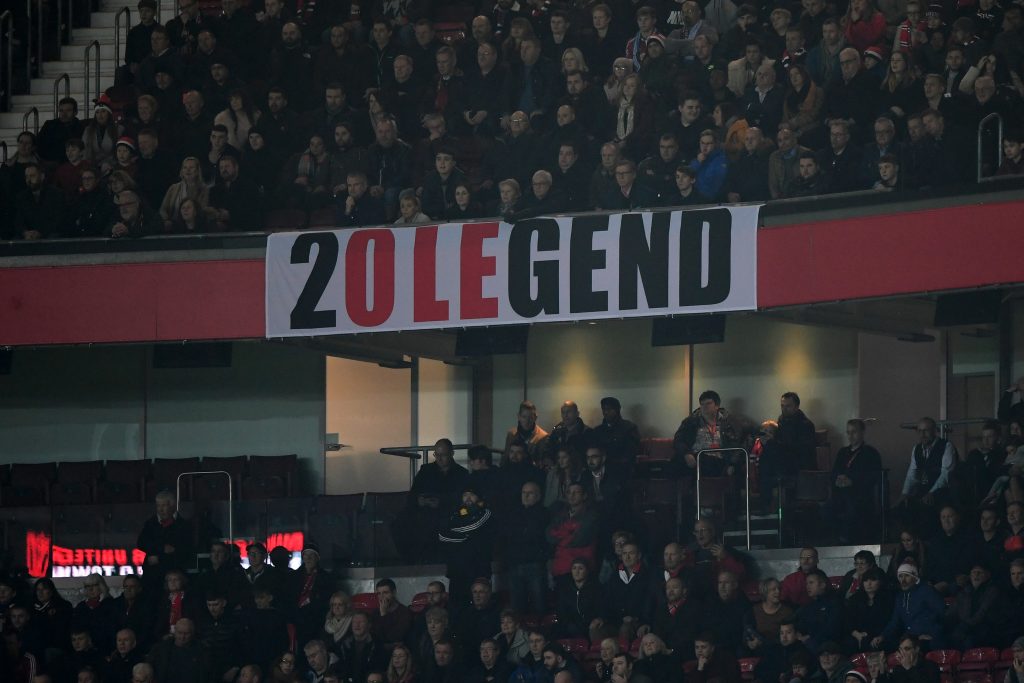 END_OF_DOCUMENT_TOKEN_TO_BE_REPLACED

There were questions about his suitability for the job because he had been sacked by Cardiff City in 2014. Of course, he is a United legend. But some asked how the Molde manager could possibly earn the respect of the World Cup winners in the United dressing room?

There also were reports that the players had wanted Michael Carrick to take the job, that there was a feeling that Solskjaer was "too nice."

END_OF_DOCUMENT_TOKEN_TO_BE_REPLACED

Less than a month later, Solskjaer has arguably overachieved. Five games, five wins, 16 goals scored and everyone at Old Trafford is smiling again.

Solskjaer is the first manager in the history of English football to win his first five matches by two goals or more. He looks more assured after every win. 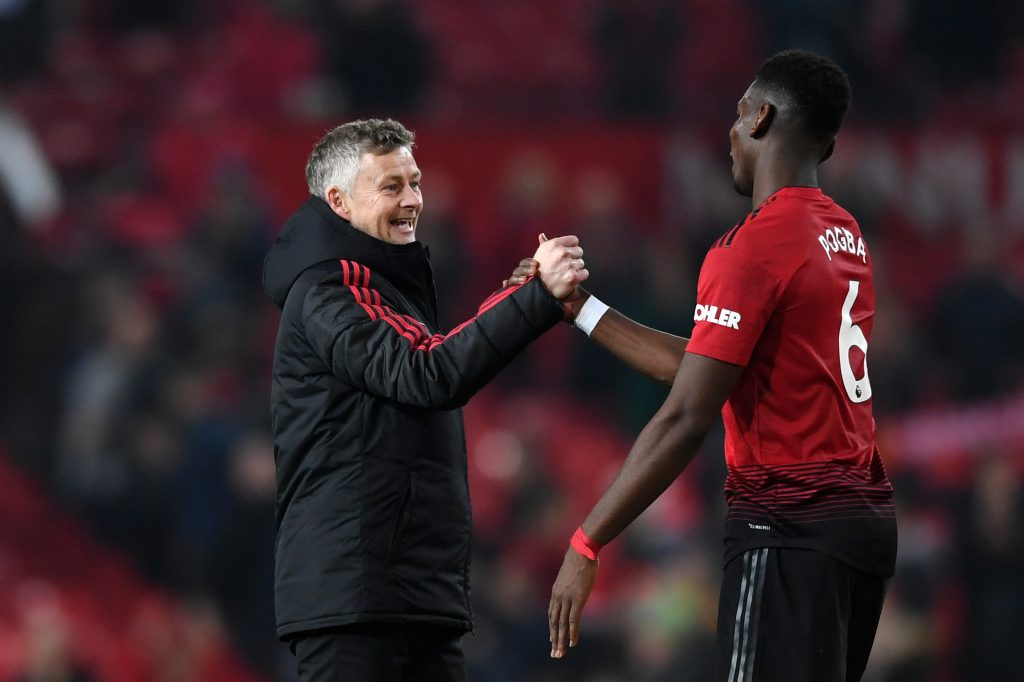 However, two doubts remain about Solskjaer.

END_OF_DOCUMENT_TOKEN_TO_BE_REPLACED

Firstly, the idea that he hasn't beaten any team of note yet, so, therefore, there is no cause for optimism following the recent good run of form. This concern doesn't hold up.

Since his appointment, Solskjaer's team have hammered Cardiff 5-1 away, beat Huddersfield 3-1 at home and Bournemouth 4-1 at home. They beat Newcastle United 2-0 away and recorded a 2-0 victory over Reading in the FA Cup.

The argument is that United should beat these teams regardless of who the manager is, and that's not entirely false.

But United's record under Mourinho against similar teams shows that it is not a foregone conclusion that they would get the better of such opposition.

They also lost away to Newcastle last January and under Mourinho earlier this season, they couldn't beat a Championship side in cup competition - going out on penalties in the League Cup to Derby County at Old Trafford back in September.

This upturn clearly isn't just because United are playing poor teams. Solskjaer is getting results because he has taken a different approach to Mourinho. 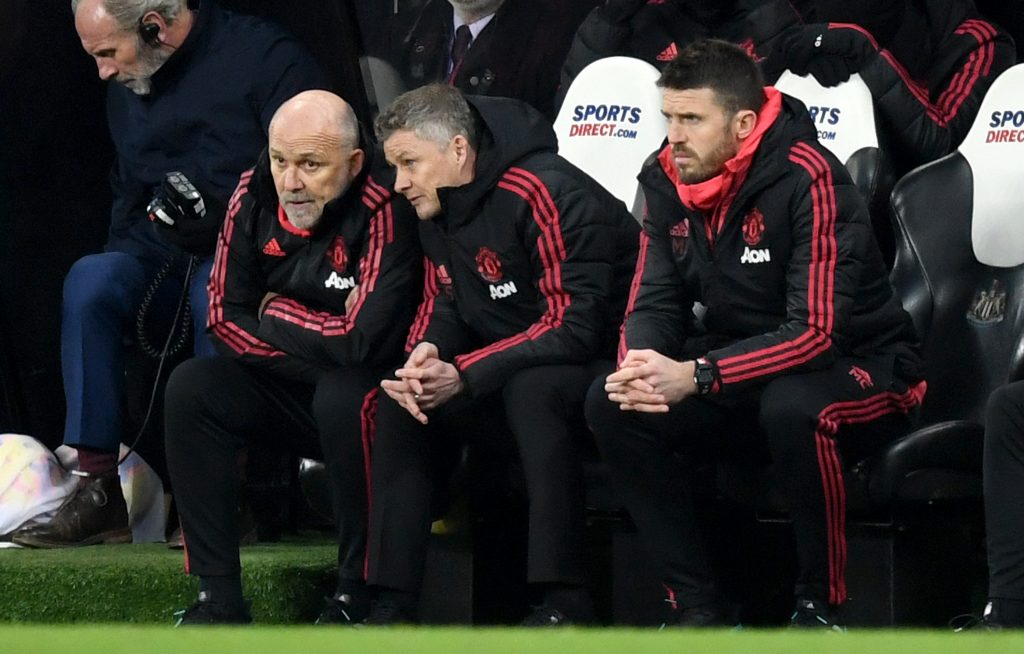 The Portuguese coach considered possession to be a danger to his own team rather than the opposition and he has a history of failing to beat so-called weaker teams, especially at home.

Under Mourinho, there were no attacking patterns of play, the team didn't take the initiative and try to break the opposition down. In the end, there were no ideas beyond waiting for an opposition error and hoping they didn't make one of their own before they got the chance to bring Marouane Fellaini on.

Solskjaer's side takes the initiative. The forwards interchange positions, the full-backs push on and the midfielders attempt to pass the ball forward. The Norwegian and others have said that the team are now playing the "Manchester United way".

Yet, such a way of playing has never been clearly defined. United are playing like a modern football team, one with the largest wage bill in the Premier League. Under Mourinho, they were a luxury version of late Premier League era Stoke City.

They have scored over 30 per cent of their Premier League goals this season in Solskjaer's four league games and their most expensive player has been brilliant.

Paul Pogba has a ridiculous four goals and three assists in four games under the Norwegian. Less than a year after he was dropped for Scott McTominay for a Champions League last-16 tie, he is indispensable to the team. Pogba didn't play a minute of Mourinho's final game, the 3-1 loss to Liverpool.

Romelu Lukaku has become a Solskjaer-like super sub, scoring twice when coming off the bench and in the FA Cup win over Reading. Marcus Rashford has excelled playing at centre-forward. 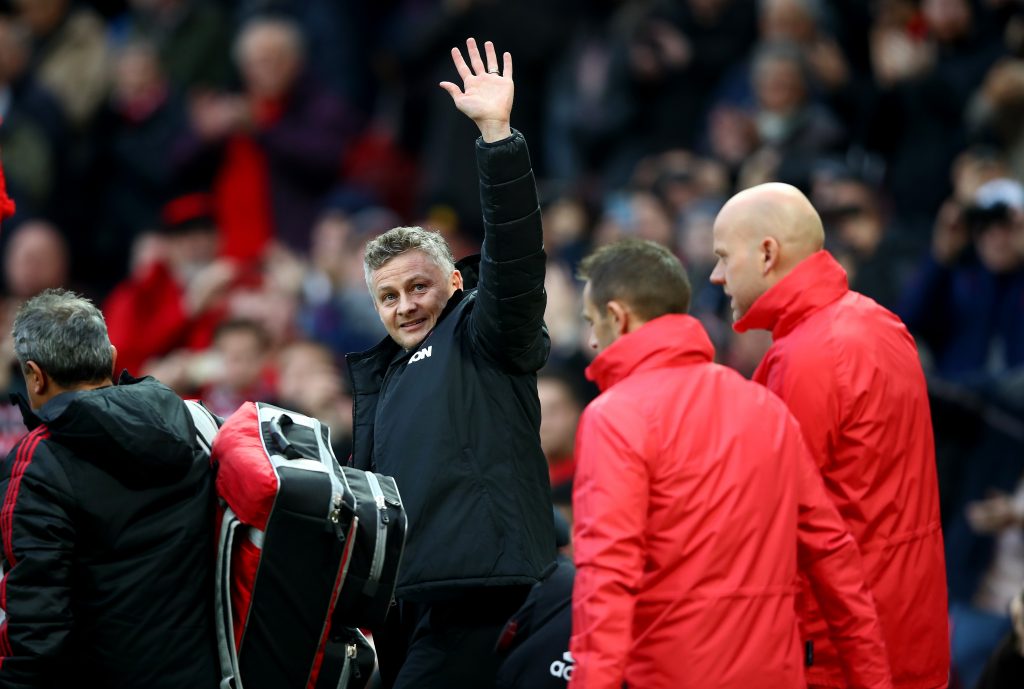 Luke Shaw has also become an important attacking outlet rather than Mourinho's punchbag. It could be argued his deployment under Solskjaer best represents the difference between the two managers.

In the 2-2 draw away to Southampton under Mourinho, Shaw played as a wing-back but was barely involved. The main United passing combination that evening was between Phil Jones and McTominay as the duo passed it amongst themselves at the back, afraid to take a risk and play the ball forward.

In the 2-0 win away to Newcastle, Shaw was involved in four of United's five main passing combinations, he was always an option for a pass and a constant attacking outlet. 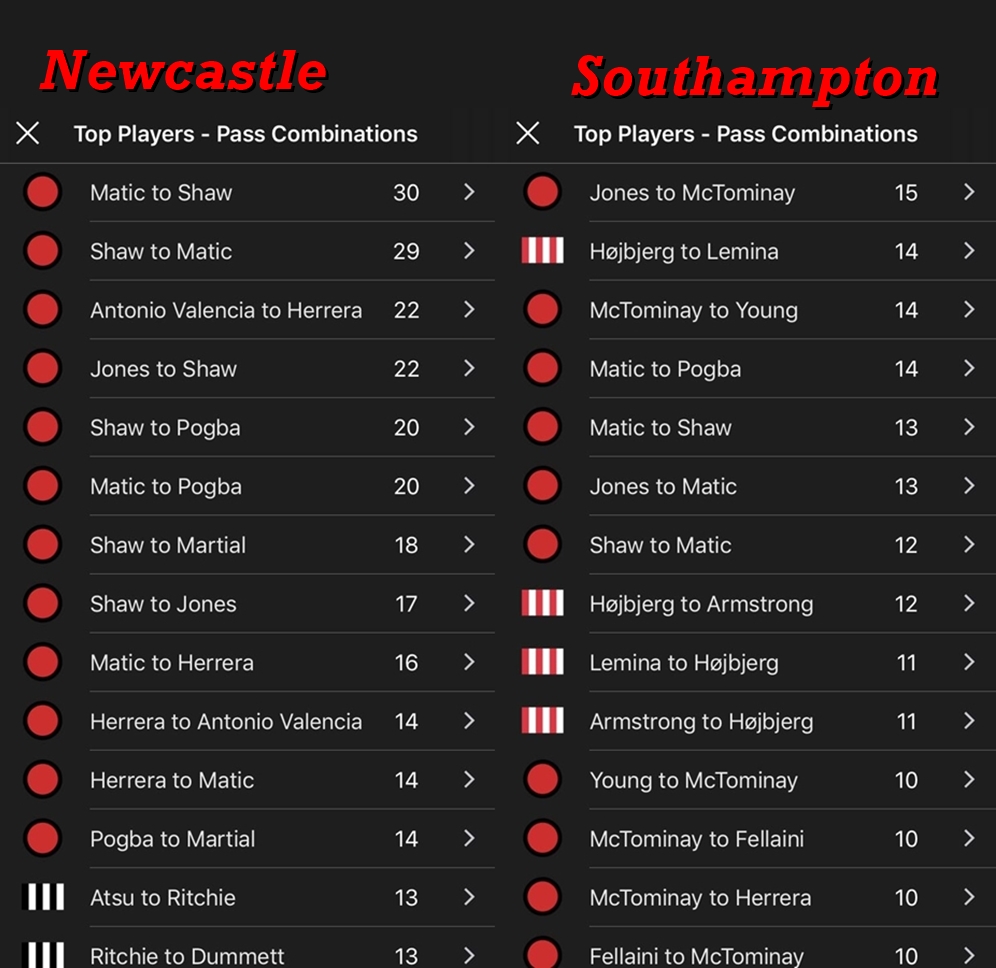 The same occured against Huddersfield and Bournemouth. Shaw was central to all of United's play. 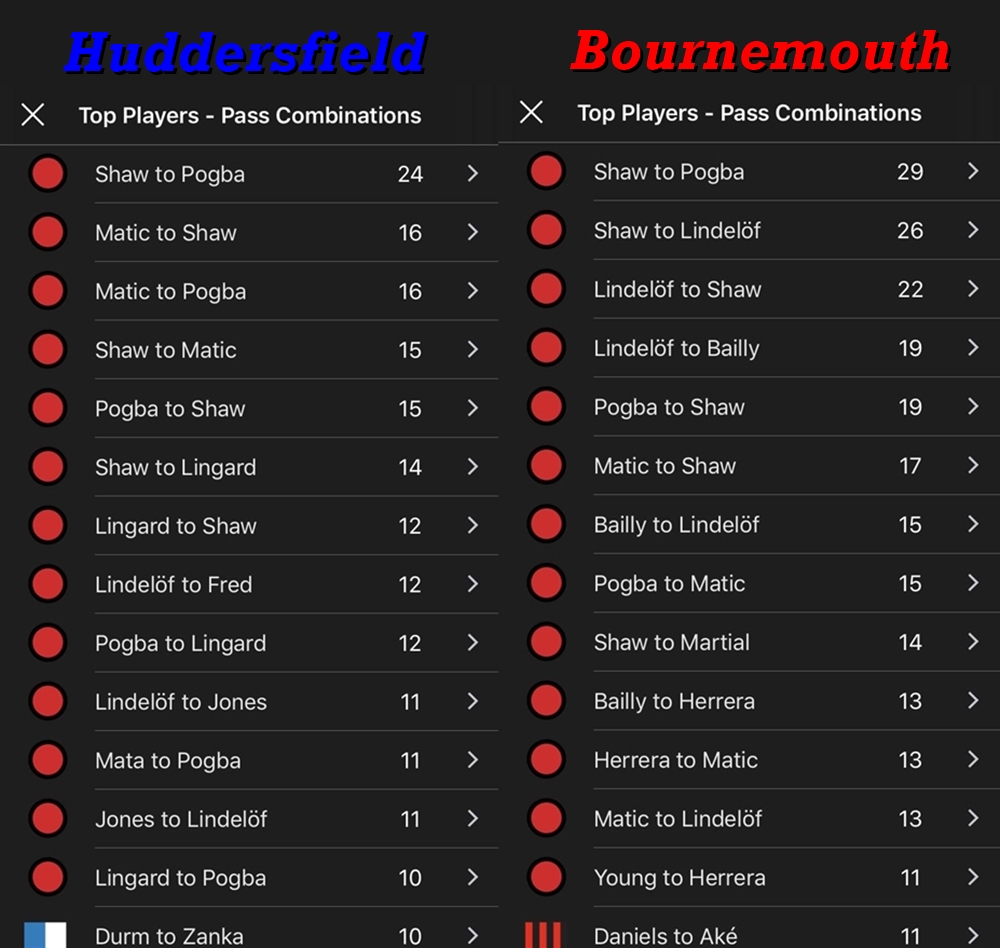 Pogba has been brilliant and Rashford looks reborn under Solskjaer. But it is Shaw's increased involvement that shows the evolution away from Mourinho's anti-football.

The former Chelsea coach infamously scoffed at Manchester City paying over £100m for two full-backs in 2017. Solskjaer recognises the importance of attacking full-backs in modern football. 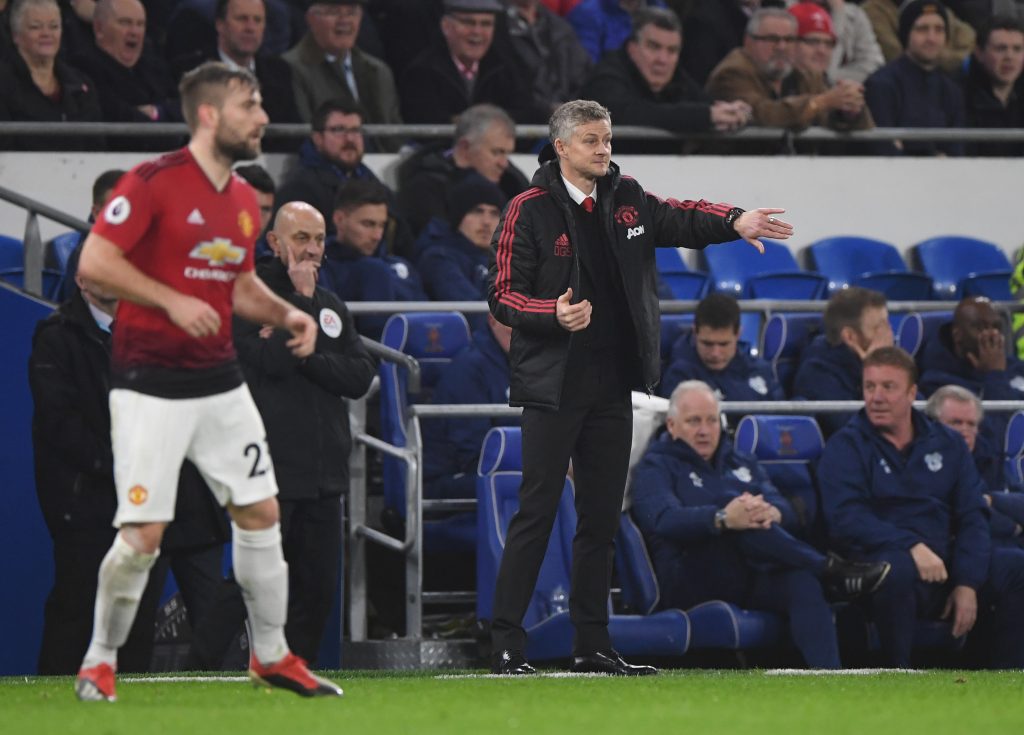 The other question mark about Solskjaer has yet to be answered - how does he measure up tactically against the rest of the Premier League's top-six? The match against Tottenham Hotspurs at Wembley on Sunday will give some indication about this.

But, regardless of how United fare against Spurs, with each passing week and every positive result, Solskjaer makes a mockery of Mourinho, who desperately underachieved with the same set of players.

With every forward pass and every overlap from the United players, Solskjaer also makes fools of those who said the players, and not the manager, was the root cause of the club's on-field troubles.

popular
Premier League player arrested on suspicion of rape facing two more allegations
Towie’s Yazmin Oukhellou and Jake McLean had ‘furious row in Turkish club’ minutes before horror crash, report claims
Lurpak spotted on sale for £9.35 in supermarkets - with security tags on packs
Conspiracy theorists believe the world will end today - here's why
British schoolboy breaks internet after attending prom in sequined tuxedo ballgown
Teens are turning up to watch Minions in suits - and why cinemas have been forced to ban them
Noel Gallagher branded 'vile' by disability charity after Glastonbury comments
You may also like
Sport
You're Cristiano Ronaldo - choose your next club
Sport
Richarlison banned from first Premier League match after flare incident
Sport
Women's Euros 2022: Everything you need to know
Sport
Albert Riera forced out of first Olimpija Ljubljana press conference by club ultras
Sport
Cristiano Ronaldo 'upset' that he will now earn less than £400,000 a week
Next Page