Djoković has been disqualified from the tournament

Top seed Novak Djoković was disqualified from the US Open on Sunday after accidentally hitting a line judge with a tennis ball that he his in frustration.

The world number one was disappointed to have lost a service game to go 6-5 down to Carreno Busta, took a ball out of his pocket and hit a forehand directly at a line judge.

It has to be seen to be believed 🤯

The moment world No.1 Novak Djokovic was defaulted at the #USOpen pic.twitter.com/tSNUirmgLq

Realising what he had done, the Serb rushed over to the judge to check on her but after a lengthy discussion, officials defaulted Djoković and he was disqualified from the tournament.

A United States Tennis Association statement said: "In accordance with the Grand Slam rulebook, following his actions of intentionally hitting a ball dangerously or recklessly within the court or hitting a ball with negligent disregard of the consequences, the tournament referee defaulted Novak Djokovic from the 2020 US Open.

"Because he was defaulted, Djokovic will lose all ranking points earned at the US Open and will be fined the prize money won at the tournament in addition to any or all fines levied with respect to the offending incident."

Having been favourite to win the tournament at Flushy Meadows, the 33-year-old will lose all ranking points and prize money earned there. He could also be fined.

END_OF_DOCUMENT_TOKEN_TO_BE_REPLACED

He has since apologised for what transpired, saying: "This whole situation has left me really sad and empty.

"I checked on the linesperson and the tournament told me that thank God she is feeling OK.

"I'm extremely sorry to have caused her such stress. So unintended. So wrong. I'm not disclosing her name to respect her privacy." 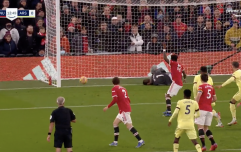 END_OF_DOCUMENT_TOKEN_TO_BE_REPLACED

Djoković's opponent said he didn't think it was intentional but that "rules are rules."

"I think it was not intentional. I don't think anyone of us do this intentionally. It's just the moment. It was bad luck.

"Of course you can't do this. The rules are the rules. The referee and the supervisor did the right thing but it isn't easy to make this decision."