The magic of the Cup is alive and well

League Two Newport County have knocked the Premier League's Leicester City out of the FA Cup with a 2-1 win at a sold-out Rodney Parade.

Jamille Matt headed home for the fourth tier side in the 10th minute, putting them on track for a huge upset, only for Rachid Ghezzal to break the home side's hearts with an equaliser in the 82nd minute.

However, moments later a penalty was awarded to Newport when the ball struck Marc Albrighton's arm, which was converted by Padraig Amond in the 85th minute.

There are 74 league places between the two sides and Newport fans belted out "Don't take me home" from the stands as they hung on through four minutes of injury time to cement the third round's biggest giant killing.

Magic of the Cup 😍 pic.twitter.com/pQs1KATK1H 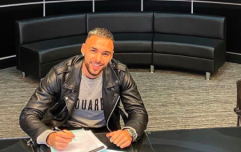 END_OF_DOCUMENT_TOKEN_TO_BE_REPLACED

Key Leicester players Kasper Schmeichel, Harry Maguire, Wilfred Ndidi and Jamie Vardy were left out of the starting line-up, but a back four of Danny Simpson, Wes Morgan, Jonny Evans and Christian Fuchs played the game.

The win follows on successes in last year's competition when Newport beat Walsall and Leeds United and came within eight minutes of dumping Tottenham Hotspurs out of the competition.

The win is their first victory against a top-flight side in the FA Cup since 1964 when they beat Sheffield Wednesday 3-2 at home in the third round.