It sent them on their way to the top of the Championship table.

This result could prove pivotal in Newcastle United's ambition to gain immediate promotion back to the Premier League.

END_OF_DOCUMENT_TOKEN_TO_BE_REPLACED

After a disappointing 2-2 draw with Bristol City at the weekend, Newcastle found themselves in second place going into this mouth-watering tie against league leaders Brighton & Hove Albion at The Amex.

The Magpies found themselves 1-0 down in the first half after conceding a penalty - Ciaran Clark tussled with a Brighton player when defending a corner, with the referee adjudicating that it was a foul.

The away side looked likely to score an equaliser in the second half, especially after the introduction of Daryl Murphy, who was causing the Brighton defence all sorts of problems.

Murphy won a corner and from the resulting ball into the box, this happened...

The jammiest piece of jam you will ever see! #NUFC # pic.twitter.com/UIfk9JuVOI

END_OF_DOCUMENT_TOKEN_TO_BE_REPLACED

He completely mishits his volley, Murphy sticks a boot out, the ball ricochets off the side of Mohamed Diame's foot and loops over the goalkeeper and into the net. 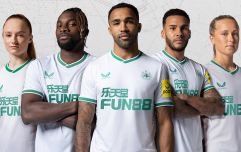 END_OF_DOCUMENT_TOKEN_TO_BE_REPLACED

Newcastle went on to win the game 2-1 after Ayoze Perez netted the winner with a cool first-time finish after he was picked out excellently by Atsu.

Top of the table for Rafa Benitez's side and this could well be the result which proves crucial in their promotion push.