The All Blacks fullback lasted only 25 minutes before going off with a head knock but he left with his side 10 points to the good.

END_OF_DOCUMENT_TOKEN_TO_BE_REPLACED

It was with trepidation that we scrolled down for the New Zealand Herald and Stuff player ratings after the All Blacks' 30-15 victory over the Lions.

Warren Gatland's men made a right fist of it for 55 minutes before Rieko Ioane's two tries ended the contest and gave the hosts a 1-0 series lead. Jonathan Davies, Liam Williams and Sean O'Brien rated highest in the JOE player ratings with Alun Wyn Jones [4/10] getting the worst.

The Kiwi press did not hand over any 4s but there were a couple of 5/10 ratings.

Stuff gave Davies and Williams 8/10 but their Welsh compatriot, Jones did not fare as well. Awarding him 5, Tony Smith wrote:

'Struggled with the pace of the game and shelled a first-half pass with a promising move beckoning. Will be under threat from Maro Itoje for a second test start.' 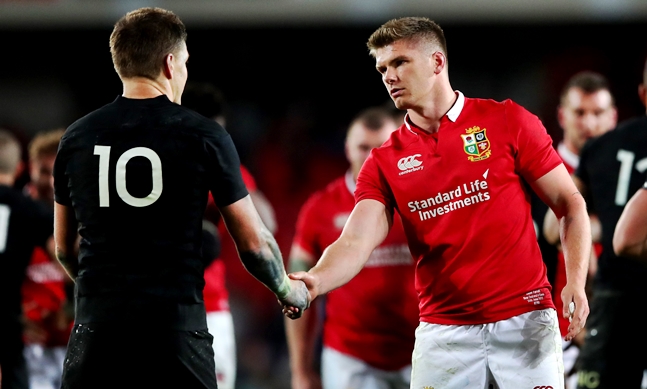 Over in the Herald, Lions outhalf Owen was rated the same as his JOE mark - 5/10. Andrew Alderson wrote:

'Struggled to make an impact, given Lions lack of possession at times. Set backs free on occasion but verve absent.'

END_OF_DOCUMENT_TOKEN_TO_BE_REPLACED

Elsewhere, there were 6s and 7s all around with O'Brien and Conor Murray being absolved of most of the play. As for the local lads, Brodie Retallick, Israel Dagg and All Blacks captain Kieran Read all rated very highly.

Read even got 8.5 in Stuff. High praise indeed.

popular
New Highway Code rule will fine drivers £1,000 for opening door with wrong hand
Motorcyclist dies in crash live on TV while trying to escape police
Fitness expert reveals army technique to fall asleep in two minutes
Woman who saved enough to retire by 26 reveals three golden rules she stuck to
Dead man ‘propped up by two other men in attempt to collect pension at post office’
Bookmaker received $420,000 worth of bets on controversial Arsenal yellow card
A definitive ranking of every swear word from worst to best
You may also like
Sport
Sam Warburton on his Lions relationship with three English "characters"
Sport
English star apologises following arrest in the wake of Lions tour
Sport
There can surely be few arguments about Lions' Player of the Series
Sport
Here's what Sam Warburton said to the referee to get that crucial penalty reversed
Sport
Tadhg Furlong bosses player ratings as Lions stage stunning comeback against New Zealand
Next Page