Amazing new Nike ad is up there with The Cage

Nike football adverts have gone down in lore in recent years

From the Nike World Cup 1998 ad featuring the entire Brazil team playing stunning football in an airport terminal, to The Mission from 2000, which follows Edgar Davids, Lilian Thuram, Pep Guardiola, Francesco Totti and more attempting to - yes - carry out a mission to steal a football of some kind from a group of what appear to be robot ninjas.

There was also one of the most fondly remembered, 2002's The Cage, which featured some of the world's best players (and Eric Cantona) playing what resembled some kind of death match on board an enormous ship in the middle of the ocean.

Recent years have seen them produce some memorable efforts, such as 2007's Take It To The Next Level, which featured first person perspectives of some of the world's best on the pitch, and tracked the story, without dialogue, of someone making their way up the football ladder, before becoming a star. 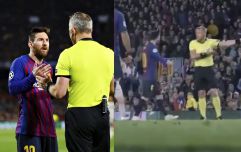 END_OF_DOCUMENT_TOKEN_TO_BE_REPLACED

There have been plenty since and between those however which, while interesting at the time, failed to truly hit the mark. Their latest offering though, called Awaken the Phantom, appears to be a rip-roaring return to form.

The ad features a number of huge names, notably Philippe Coutinho, Kevin De Bruyne, Neymar, Ronaldinho and Andrea Pirlo, and is set in a world where people - both fans and footballers alike - are discussing the "Phantom", a seemingly mythical footballer which also happens to be the name of some new Nike boots.

Now, I'm not going to spoil it for you but I will say: it features an evil Andrea Pirlo, I think it is great and you should watch it. Let us know if you agree.

popular
Uproar over VAR decision to rule out Ollie Watkins' equaliser against West Ham
A definitive ranking of every swear word from worst to best
'Time traveller from 2030' passes lie detector test over future predictions
People who refuse COVID vaccine could be banned from football matches and the cinema
Moderna vaccine trial shows 100% efficacy in dealing with severe Covid-19 infections
QUIZ: Fill in the missing club from these players' career paths - Part 6
Troy Deeney criticised for comments on David Luiz's collision with Raul Jimenez
You may also like
Sport
Barcelona turned down Erling Haaland and loaned former Portsmouth midfielder
Sport
Barcelona 'to sue Neymar for £9m' after mistakenly overpaying him
Sport
Lionel Messi told "you know where the door is" after questioning manager
Sport
Man City could offer Lionel Messi pre-contact before he enters Barca contract talks
Sport
Barcelona could go bankrupt 'by January', according to reports
Next Page