Cesc Fabregas is a Monaco player. The contract is signed, the photographs of him posing with the club's shirt are doing the rounds and, most importantly of all, the slightly odd announcement video has been posted to social media.

There is, probably, a really obvious reason other than the 'Now... it's time' voiceover to cast a slightly weary looking Fabregas as a watchmaker for his big unveiling. But for now at least, it's not jumping out at us. So, while we try and make further sense of it all, just enjoy it for what it appears to be: very odd.

Talk of the Spaniard's move to the struggling Ligue 1 side first did the rounds before last weekend, his emotional reaction to being substituted in the FA Cup game against Nottingham Forest as good as confirming the news that he was on the cusp of a transfer. 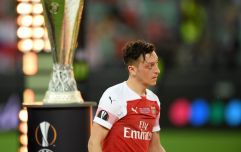 Fabregas: 'Mesut Ozil doesn't have it in him to be a leader'

END_OF_DOCUMENT_TOKEN_TO_BE_REPLACED

With the ink barely dry on Fabregas' contract, reports have also linked Monaco with a move for one of his former teammates, Michy Batshuayi.

Batshuayi has been unable to play regular first team football since joining Chelsea from Marseille in 2016, spending the second half of last season on loan at Borussia Dortmund and the first half of this campaign in Spain with Valencia. The LaLiga club have now cancelled that loan deal, possibly opening the door for the striker to move to Monaco.

Thierry Henry worked with Batshuayi through his coaching role with the Belgian national team and, according to the Telegraph, is thought to be keen on reuniting him with Fabregas in the principality. Monaco would reportedly look to loan Batshuayi for the remainder of this season with a view to making the deal a permanent one in the summer.

Batshuayi is also thought to be attracting interest from both Everton and Crystal Palace. Monaco aside, the Telegraph's report also claims he has a number of other potential suitors overseas.