It was touch and go

Mohamed Salah has been passed as fit to play in Egypt's opening group game against Uruguay tomorrow after recovering from a shoulder injury.

The Liverpool forward sustained the injury playing in the Champions League final as he fell to the ground after locking arms with Sergio Ramos.

The game between Egypt and Uurguay could well decide who tops Group A, as Russia and Saudi Arabia have significantly weaker squads.

BREAKING: Egypt say striker Mohamed Salah is fit to play against Uruguay in Group A match on Friday. #SSN pic.twitter.com/2oFjrUTpaV 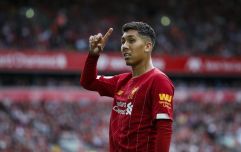 END_OF_DOCUMENT_TOKEN_TO_BE_REPLACED

There is a strong possibility that we could be in for a second instalment of the Salah vs Ramos feud, if Spain top their group with Egypt coming second in theirs.

Egypt will be relying on Salah to fire them through the group stage, while also hoping Arsenal's Mohamed Elneny and West Bromwich Albion's Ahmed Hegazi can hold down the midfield and defence respectively.