Barnsley are back in the Championship after beating Millwall in the Play-Off Final, but the game was marred by unsavoury scenes shortly before the final whistle.

A small number of Lions fans appeared to chase their Yorkshire counterparts, with some alleging that they broke through a police barrier separating supporters of the two clubs.

Barnsley were 3-1 up in the closing stages when the barrier was reportedly broken, forcing Tykes fans to make a swift exit.

I think there might be some trouble here. Just maybe #millwall pic.twitter.com/hH6gBWwwEk 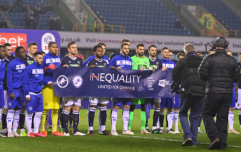 END_OF_DOCUMENT_TOKEN_TO_BE_REPLACED

Those Barnsley fans who left were deprived of the opportunity to celebrate their team's victory.

Mark Beevers pulled a goal back before half-time, but a second-half header from Welsh international Lloyd Isgrove wrapped up victory for the Yorkshire side.

Millwall, who finished seven points above their opponents in the regular season, were denied an instant return to the second tier after being relegated in 2015.

While those at Wembley for the match reacted with a mix of fear and anger, those away from the ground turned to humour.

That #Millwall fighting mobile phone footage is shocking, disgusting. Do people not know to turn their phones to landscape when they video?

popular
Scotland international rugby star Siobhan Cattigan dies aged 26
Woman wins millions after suing mum's GP for allowing her to be born
A definitive ranking of every swear word from worst to best
Elon Musk shares 'evidence' we are actually living in a simulation
Nasa warns 'concerning' asteroid will break into Earth's orbit in a week
There's a petition to stop interviewing Will and Jada Smith so we can all be 'free'
Here's how to see who's been taking screenshots of your Instagram Stories
You may also like
Sport
Millwall players still planning to take the knee before game against QPR tonight
Sport
Millwall will link arms with QPR on Tuesday night, instead of taking the knee
Football
QPR confirm they will take a knee at Millwall on Tuesday night in show of "solidarity"
Sport
Colchester tell fans who booed anti-racist protest to 'stay away from our club'
News
Millwall fans 'completely wrong' to boo players taking the knee
Next Page