Mike Tyson being brought to tears is a legitimately tough watch

For a long time, Mike Tyson was the most-feared fighter on planet Earth.

In 1985, an 18-year-old Mike Tyson began his professional boxing career. From the very first year, it was obvious that something special had entered the boxing world. 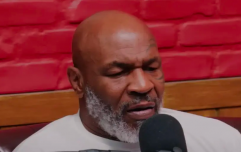 END_OF_DOCUMENT_TOKEN_TO_BE_REPLACED

Tyson won all 15 of his professional bouts in his debut year, finishing every single opponent by knockout. The longest any fighter lasted with 'Iron Mike' in that calendar year was little over three rounds, with most being put away in the first.

That dominance was the culmination of the work Tyson did with trainer Cus D'Amato, who took him under his wing and adopted him as his son after Tyson's mother passed away. D'Amato never got to see Tyson become world champion as he died of pneumonia in November 1985.

Tyson opened up about D'Amato's influence during an in-depth interview with E:60's Jeremy Schaap. From an early age, D'Amato knew that Tyson was destined for greatness.

Jeremy Schaap: "It's interesting, Mike. You get emotional when you talk about Cus, but you've said Cus didn't like it when you showed emotion. Why didn't he want you to show emotion? Did he equate it with weakness?"

At this point, Tyson became emotional thinking about his adopted father. He required a towel to wipe away the tears as he questioned how D'Amato could have known the extent of his potential.

Tyson: "I don't know what he said. How do I do an interview about him, I start crying? How did this guy know? How did he know I was the one?

Schaap: "Well, you were a specimen."

Tyson: "It takes more than that to be a fighter."

Check out the exchange in the video embedded below.

"It takes more than that to be a fighter."