New Nottingham Forest manager Martin O'Neill has said that he would be delighted to be joined by former assistant manager Roy Keane at the club.

O'Neill and Keane, who both played for Forest as players, worked together for five years with the Republic of Ireland before they departed the national team last November but the recently appointed Reds manager said that a spot will be open for Keane should he choose to join the club.

"I would dearly like him to join us, this has happened very quickly and he has a number of things to sort out himself and we’ve had some discussions here," O'Neill said.

"I’d like him to join if that’s the case, there’s a spot open for him and I’m hoping that may happen. It may not, he has a number of things obviously to consider himself, personally and professionally, but he will keep me informed but I would dearly like him to join up." 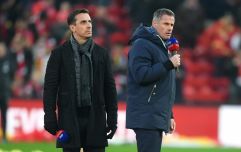 END_OF_DOCUMENT_TOKEN_TO_BE_REPLACED

O'Neill admitted that Keane could be difficult to handle at times with his public falling out with both Jon Walters and Harry Arter in the Ireland camp serving as high profile examples of his volatile nature but that his temperament is ultimately what makes him special according to O'Neill.

"He was a great asset to me when I was the manager of Ireland. We had some really great days.

"He’s tough to handle, there’s no doubt about that, but that’s what probably makes him pretty special. He was a special footballer, drove Manchester United on for 10 years and he didn’t win those things by just sitting around."