Being a famous footballer certainly has its perks at times

At some point in our lives, most of us have probably experienced being turned away from somewhere for not being able to provide the correct identification on the door.

With that in mind, most of us will have been able to relate to Borussia Monchengladbach's Marcus Thuram, who was initially caught short for ID when trying to enter the San Siro.

Thuram - the son of World Cup-winning French defender, Lilian - had arrived at the stadium for a press conference prior to his club's Champions League encounter with Inter Milan on Wednesday night.

With no ID available, the striker improvised by whipping out his phone and typing his name into Google to prove who he was.

Gladbach's official account tweeted pictures of the exchange before later deleting them. 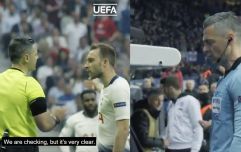 END_OF_DOCUMENT_TOKEN_TO_BE_REPLACED

Thuram's quick thinking paid off, and he was soon able to take his seat next to manager Marco Rose for the pre-match press conference.

It's unclear how the mix-up came about, but some reports have suggested it may have been prompted by Thuram wearing a face mask as part of Covid-19 protocols.

Gladbach were denied a famous win over Inter after a stoppage time equaliser from Romelu Lukaku. The former Everton and Manchester United striker had opened the scoring early in the second half in Milan only for the Bundesliga side to hit back with a Ramy Bensebaini penalty.

With little over six minutes of regulation time to play Jonas Hofmann looked to have scored the winner after being played through by a magnificent pass from Florian Neuhaus.

It was not to be, with Lukaku salvaging a point for Antonio Conte's side at the death.

popular
Actor who plays Neil in The Inbetweeners 'embarrassed' to be a Millwall fan
Infantino says Wenger's proposal change offside rule would 'stop marginal offsides'
Millwall manager responds to fans booing players who took the knee
Millwall fans boo their own players as they take the knee before kick-off
Paul Merson says Mesut Özil 'has to play' against Tottenham
QUIZ: Fill in the missing club from these players’ career paths – Part 3
A definitive ranking of every swear word from worst to best
You may also like
Sport
QUIZ: Name all 50 of these 2000s Champions League players - #2
Sport
Porto boss tears into "extremely unpleasant" Pep Guardiola after Man City defeat
Sport
QUIZ: Name all 50 of these 2000s Champions League players
Sport
Phil Jones one of three senior Man Utd players left out of Champions League squad
Sport
Can you name these Champions League-winning players from the last 20 years?
Next Page