There has been a steady stream of players, ex-pros, pundits and even politicians, coming out in opposition against The Super League and the sense of momentum is truly starting to pick up.

Marcus Rashford MBE - charity worker, humanitarian, Man United's no.10 and all-around man of the people - is the latest to throw in his two cents. It took nothing more than a short, sweet, yet simply emphatic tweet:

It's the pure and simple sentiment that we have been hearing none stop since the announcement was revealed and, more significantly, all our lives: "football is nothing without fans". Sir Matt Busby knew that and his 'Babes' died for this sport - our sport. 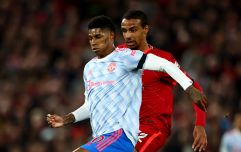 END_OF_DOCUMENT_TOKEN_TO_BE_REPLACED

Now, his club, Manchester United - along with owners of 11 other European footballing institutions - are turning their backs on that statement; on the very people that put them where they are.

As football fans, aside from the spirit of the competition itself, we know that the beautiful game's greatest asset is us. It may make billions of pounds every year and be marketed by greedy fat-cats, but it lives and dies on whether we watch it.

Whether it's in the ground or at home, the game means nothing if we aren't there to witness it. It's a working man's sport that has been cannibalised by billionaires.

The entire footballing world and non-football fans alike are coming out against this: it isn't right. Marcus Rashford knows it, you know it - we all know it. If we stand together we can stop it. Don't f*ck with football or football fans.