'This is not politics, this is humanity'

Marcus Rashford has responded with a lengthy statement after his bid to extend free school meals over holiday periods was voted down by MPs. 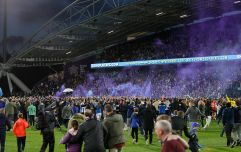 END_OF_DOCUMENT_TOKEN_TO_BE_REPLACED

Fresh from scoring his team's winner in Paris on Tuesday night, Rashford had started Wednesday by tweeting he would be keeping a close eye on developments in the Commons.

However, the Labour Party's motion to extend free school meals across the holidays until Easter 2021 was rejected by 322-261 votes.

Soon after Rashford tweeted a statement which urged people to set aside political differences and see the bigger picture.

'A significant number of children are going to bed tonight not only hungry but feeling like they do not matter because of comments that have been made today,' it said.

END_OF_DOCUMENT_TOKEN_TO_BE_REPLACED

He later stressed: 'This is not politics, this is humanity.'

'We talk about the devastating impact of COVID-19 but, if projections are anything to go by, child food poverty has the potential to become the greatest pandemic the country has ever faced.'

Time we worked together. pic.twitter.com/xFPsgBiPQC