Manuel Pellegrini might have a familiar Premier League escape route

Manchester City are just one point off top spot in the Premier League, but that might not be enough to save Manuel Pellegrini's job.

The Chilean has had a pretty good season by most standards, helping City win their Champions League group for the first time in their history as well as navigating their way to the League Cup semi-final and the fourth round of the FA Cup. As it stands, the quadruple is still on. 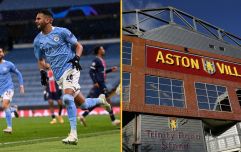 END_OF_DOCUMENT_TOKEN_TO_BE_REPLACED

But the spectre of Pep Guardiola hangs over the city of Manchester, although recent reports suggest the Etihad might not be his landing spot.

With all of this in mind, it wouldn't be surprising to see Pellegrini tempted further east by a big-money offer from Russia.

The Daily Star are reporting that Zenit St. Petersburg will make a £5m move for the former Real Madrid coach, with current manager Andre Villas Boas set to leave at the end of the season.

Villas Boas knows all too well the pressures of managing a top English club, but has rediscovered the form that made him so desirable to both Chelsea and Tottenham a few years earlier.

At this stage in his career, it might be hard to tempt Pellegrini to join the Russian champions, especially with rumours circulating that he may be offered the Chilean national team job after Jorge Sampaoli stepped down.