Manchester United target Alex Telles has urged Porto to lower their asking price for him, according to the Guardian.

The Portuguese club are demanding €20m (£18.3m) for the left-back, who has just a year to run on his contract.

Telles believes this is unrealistic, given the fact he will be free to negotiate a free move come January, and wants the club to lower his price tag to push through a move to Manchester United.

United are of the belief that £12m would be a fair price for the 27-year-old, with all parties well aware that Porto need money to fund reinvestment in the squad.

United had initially hoped to sign Sergio Reguilón from Real Madrid to provide competition to Luke Shaw at left-back, but their refusal to indulge Madrid's insistence on a buy-back clause saw Tottenham hijack the deal.


United then turned their attention to Telles, who will be cheaper but is four years Reguilón's senior. Their third choice option would reportedly be Nicolas Tagliafico. Although Ajax are likely to demand in the region of £20m for the 28-year-old. 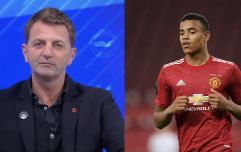 END_OF_DOCUMENT_TOKEN_TO_BE_REPLACED

Telles looks the most likely option for now, but United will have to loosen the pursestrings a bit if they are to get any more business done before the deadline on October 5.

So far, the Red Devils have only brought in Donny van de Beek from Ajax for £35m, a good signing but not a priority.

After the Jadon Sancho deal went quiet, United fans are growing increasingly frustrated with the club's lack of activity in the transfer window after it became abundantly clear towards the end of the restarted 19/20 season that they needed to reinforce their bench.

Telles would be a solid addition, providing a greater attacking threat than Shaw, who has recorded just seven assists in 158 Premier League appearances.