Well, it's certainly a Manchester United shirt, we'll give it that much

As a globally popular club, there is always a lot of attention regarding Manchester United's new kits, and the good people at Footy Headlines have published what appear to be leaked official images of adidas' offering for the 2020/21 season.

And look, we're gonna level with you here, it's not looking too good.


The new shirt is red, which is encouraging at least, with the traditional three adidas stripes going along the shoulders. But it's in the shirt design details where things get a little 'meh'.

It features small horizontal yellow and black lines all across the kit. Yellow of course features prominently on the United crest, but rarely has it ever featured on the home kit in this manner. 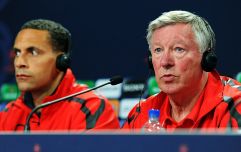 END_OF_DOCUMENT_TOKEN_TO_BE_REPLACED

Crucially, after the offerings we've seen adidas create for the likes of Arsenal, Real Madrid, Bayern Munich, Flamengo and all of Major League Soccer's teams, this effort just falls a little flat.

The effect ends up looking like a form of static on a television, or like, as many have pointed out after previous leaks, the seat of a bus you'd take around town.