Someone at ManUtd.com dropped the ball.

Antonio Valencia has been one of the best players in the league so far this season, but he hasn't been one of his own club's top three. According to Manchester United, anyway.

END_OF_DOCUMENT_TOKEN_TO_BE_REPLACED

The Ecuadorian is one of four men nominated for the Premier League Player of the Month August award - and rightly so - but he hasn't made the cut in his own team's list. He's been highlighted as his side's best contender and one of the whole division's best performers, but he's not rated as highly at Old Trafford.

The right back has been in flying form this season. Jose Mourinho's men have won all three league games and picked up a Community Shield trophy in the mix and their former winger has been integral to the team's two clean sheets in the last two weeks as well as being one of their most dangerous attacking threats down the right.

Fittingly, his athleticism, delivery (for Ibrahimovic mostly) and consistency thus far are being recognised - outside of United at least.

Valencia is one of four nominations up for the EA Sports Player of the Month gong, along with Hull's Curtis Davis, and Chelsea's Eden Hazard and Manchester City forward Raheem Sterling. 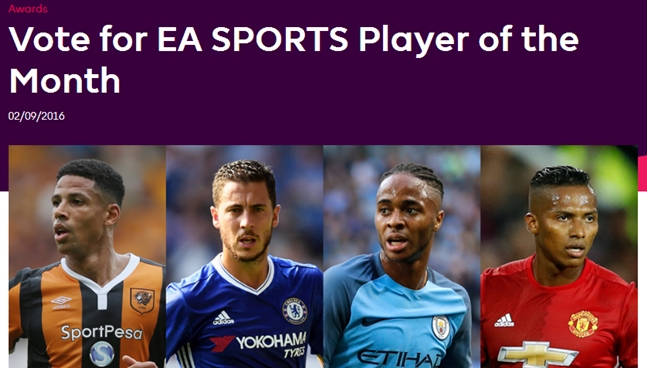 END_OF_DOCUMENT_TOKEN_TO_BE_REPLACED

Manchester United, meanwhile, are running their own Player of the Month competition and Valencia is nowhere to be seen.

They've actually gone with two other defenders, never mind three more players from the same team. But these men have made the cut in their eyes ahead of the South American.

And it's not like they're unaware of Valencia's feats.

There's no changing some people's minds though.